Flexible power in cloud and wholesale data centers? It can be done

A technique to meet some of the biggest challenges faced by the hyperscale, wholesale and colocation data center market

Hoya Capital defines wholesale data centers as serving larger customers, with long leases of 5 to 15 years. It says “data center REITs own roughly 30 percent of investment-grade data center facilities in the US and command roughly a fifth of data center capacity globally.” 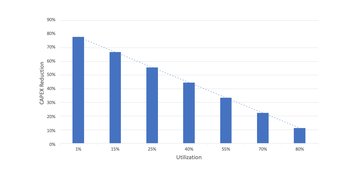 Companies and REITs have typically built their reputations for uptime and security by providing critical infrastructure at scale through Tier 3+ facilities, usually with 2N or N+1 UPS and N+1 or 2 back-up generators and dual-path infrastructure as standard. In power terms redundancy was king.

But in an increasingly competitive market where high capital expenditure is needed to maintain market share and which is experiencing downward margin pressure, hyperscale, wholesale and colocation players need to squeeze costs and improve income wherever possible. One way to do this is to address power infrastructure inflexibility.

The growth of the wholesale data center colocation industry proves it has done a fantastic job of securing and deploying grid power capacity for customers across the globe. But having secured and paid for many megawatts of grid capacity, data center owners should face up to the constraints of traditional static power topologies which restrict their access to the available power, leaving costly stranded capacity unused and pushing costs onto customers.

Large hyperscale customers inside wholesale colocation facilities are buying massive amounts of space and paying for huge chunks of dedicated power capacity. They may not be able to name their own price, but their scale certainly gives them leverage in pricing negotiations. For the provider, this makes power cost efficiency of paramount importance.

Smaller customers, those drawing below 1MW from shared infrastructure, want guaranteed access. In order to maintain profitability data center owners can oversubscribe the shared portion of their power capacity. But this is risky as demand from customers such as MSPs and retail colocation providers is unpredictable. This causes planning headaches for the data center operator as demand peaks and troughs from uncontrollable customer behaviour.

Operators may want flexibility, but in power topology terms the reality is that data center engineers are as constrained as the rest of the market

Over the last 20 years, there have only been incremental changes to the four main power topologies. There has been no step-change away from fault tolerant, block redundant, distributed redundant and ISO parallel setups.

The process around which deployment is chosen remains consistent. Developers consult with engineers, the system is designed, it is installed and tested and once switched on it is rarely if ever changed. In effect, often the set-up is never touched again. And what is common to all, is that in all data center power topologies little or no automation exists.

Once in operation, the main reasons for not changing the power topology are expense and difficulty. In order to alter a 2N system to a N+1 system is complex in terms of distribution and components. And the change may require planned downtime which inevitably increases risk.

How ARP changes the power game

i3 believes that Adaptable Redundant Power (ARP), launched in 2018, will help ensure power provision can be both flexible and responsive and can deliver cost savings by capturing stranded capacity in the data center.

Different modes offer complementary features and functions. ARP can enable unused power capacity to be accessed in normal conditions. It provisions predetermined redundant levels to IT loads where the power is derived from unused power capacity. With IT Load Prioritization, ARP can service different hierarchies of application needs in the event of an unplanned power outage.

The numbers are huge. For companies looking to provide a better service and improve their long-term return on capital deployed and their OPEX bottom line, ARP is the answer.