Clash of the cooling titans

Technology battles don’t come much more elemental than this. Dell has launched a water-cooled HPC system called Triton, explicitly taking on HP’s water-cooled Apollo. So, in terms of Greek mythology, the messenger of the sea is taking on the god of the Sun.

Triton, as you’d expect, deals with water pretty boldly, running it in copper pipes directly to the server sleds where it can remove heat from the processors - Dell says it’s arranged a special 200W Xeon processor from Intel, which can deliver more performance because it can be run hotter in a Triton system. 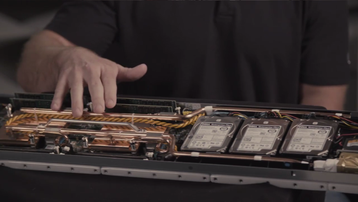 Apollo, the system which HP launched a couple of years back, is a bit more cautious with the water. It runs it to a cold plate, and the heat is conducted from the processors by “heat pipes” - sealed tubes of alcohol - installed in the  server module. The alcohol evaporates at the hot end, to condense at the cold end.

It’s good to see Dell doing some hardware innovation as, lately, its servers haven’t seemed that special, perhaps because the company is focussing on its ongoing mega-merger with EMC. But in this instance, it looks as if Dell has gone further than HP - and further than any other mainstream computer firm - in bringing the water inside the actual IT kit.

Dell’s thermal engineer Austin Shelnutt says Triton can do this because Dell has done “an inordinate amount of testing”. Customers are wary of having water close to mission critical IT components, but it’s worth doing because water carries away heat so much better than air.

Shelnutt says Triton systems should have a PUE of around 1.03 (obviously PUE should refer to entire existing data centers, so he’s talking theoretical partial PUE here) and the company reckons they could use 62 percent less power than an HP Apollo 8000.

To reassure customers, Dell has put leak detection measures in place, and has run a sensible bunch of tests - taking the copper pipes to 450 psi of pressure, when they’ll actually only be used at around 60 to 70 psi, and testing them in high temperature, high humdity, and for shock and vibration.

There are still components that are air cooled, but Dell takes that hot air across a heat exchanger so the water is used there too.

Dell makes a good pitch, and interestingly claims Triton can achieve that PUE of 1.03 “in all climates”, which is a bold claim given how climate dependent PUE is.

It’s another step in the normalization of liquid cooling, and I’ll be interested to see how HP responds - and also to see if this endorsement by a big player is good for the business of the specialized liquid cooling players who have been doing this for some time.