Category 7 and 7A see their sunset 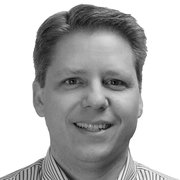 Between Cat 6A and new Cat 8 offerings, 7/7A no longer offer an advantage

In 2016 and 2017, standards bodies ISO/IEC and ANSI/TIA approved Category 8 cable and connectivity, with the ability to support IEEE 25GBASE-T and 40GBASE-T Ethernet.

The introduction of Cat 8 calls into question the usefulness of Cat 7 and Cat 7A cabling systems, as the benefits of Cat 6A and now Cat 8 have industry professionals asking, “Where does Cat 7 or 7A fit?” 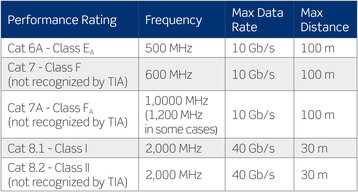 Cat 7 was established to offer a higher frequency and greater performance than Category 6, with the ability to transmit 10 Gb/s. Similarly, Cat 7A offers a higher frequency and greater performance margin than Cat 6A, but it doesn’t increase the bandwidth. As Cat 7 and 7A have never been widely adopted, it appears that they will likely see even lower adoption moving forward.

1. Active equipment uses an RJ-45 connection interface. Both Cat 6A and Cat 8.1 use RJ-45 jacks, whereas Cat 7 and 7A have three different types of non-RJ connectors (TERA, ARJ, GG45) that require a hybrid patch cord to connect to ports on servers and switches. While the Cat 8.2 cable option (recognized by ISO/IEC but not ANSI/TIA) is backwards compatible with Cat 7 and 7A components, it still requires a similar hybrid solution to interface with servers and switches. 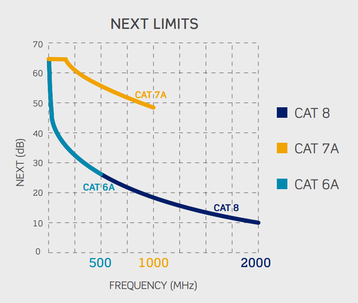 2. Category 8 is the only option for testing standards at data rates greater than 10 Gb/s for cabling using RJ-45 jacks. And Cat 7 and 7A testing is not compatible with RJ-45 connections; this means that a Cat 8.1 RJ-45 jack cannot be installed on a Cat 7A cable and then tested to the Class FA standard.

The reason for the compatibility issue is based on how the standards bodies established the limit line for the near-end crosstalk (NEXT) parameter. For Cat 8 (Class I), the standards extended the NEXT limit for Cat 6A (Class EA) from 500 MHz to 2 GHz. For Cat 7 and 7A (Class F and FA), the limit line for NEXT was shifted up (see chart). For this reason, RJ-45 will not support the Class F and FA channels.

3. If you base your cabling system choice on the highest frequency, Cat 8 is by far the best option. Cat 8 operates at 2,000 MHz — nearly double that of Cat 7A solutions.

4. Cat 8 components can be used as a substitute for Cat 7A. If there is a specification to use Cat 7A on a project, Cat 8 will work in place of the specification.

5. All four categories (6A, 7, 7A, and 8) are available in a “highly shielded” construction. Some cabling system customers have been attracted to Category 7 and 7A for its S/FTP design, with dual shielding protection against electromagnetic interference (EMI) and alien crosstalk (AXT). However, this shielding is also available with Cat 8 and Cat 6A.

6. Cat 7 and 7A cabling has no true IEEE application. Cat 6A supports the IEEE 10GBASE-T applications, while Cat 8 supports both 25GBASE-T and 40GBASE-T. Again, the maximum data rate supported by Cat 7 and 7A is 10 Gb/s, just like Cat 6A.

In essence, for the highest performance available in a copper cabling system, Cat 8 is now your best choice. If you don’t intend to build a migration path to 25GBASE-T or higher, Category 6A is the clear choice over Cat 8 and Cat 7 and 7A.