Bitcoin’s energy use is controversial, but that is not the whole story

The data center and IT industry is a relatively minor — but nevertheless significant — contributor to greenhouse gas emissions. The issue of wasteful digital infrastructure energy consumption is now high on many corporate agendas and is prompting companies and overseeing authorities to act.

But one of the biggest and most problematic IT-based consumers of energy is not generally covered by these existing and planned sustainability initiatives: cryptocurrency networks — the mining platforms Bitcoin and Ethereum, in particular. While Bitcoin’s huge energy consumption is widely known and elicits strong reactions, the role and use of the energy-intensive blockchain proof-of-work (PoW) security mechanism is rarely discussed in a corporate context, or as part of the overall sustainability challenge. This is beginning to look like a significant oversight. 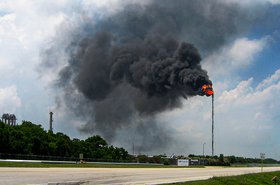 A handful of companies have data centers at feeding on oil well gas flares. Do their environmental claims stand up?

Solving the PoW puzzle – which involves a race among miners to process a block of transactions — is a compute-intense activity calling for power-hungry processors to work more or less continuously. At scale, this adds up to a lot of energy.

How big is the problem?

The scale of cryptocurrency mining’s energy use can be seen when set alongside the energy used by the data center sector as a whole.

According to various estimates, all the world’s data centers combined used between 210 TWh (terawatt hours) and 400 TWh — or even higher — in 2020, according to various studies.* The wide range is partly accounted for by the differing methodologies used by the authors, and by a lack of sufficient information on how much various technologies are deployed.

But it is clear that in these data centers, a combination of innovation (Moore’s law, virtualization, cloud, etc.) and energy conservation has held down potentially runaway energy consumption growth to a few percentage points in recent years.

With Bitcoin, the opposite is true. Not only is energy consumption extremely high, but it is climbing steadily. A study by the UK’s Cambridge Centre for Alternative Finance in April 2021 put global power demand by Bitcoin alone — just one of many cryptocurrencies — at 143 TWh a year. Other researchers arrived at similar estimates. If Bitcoin were a country, it would be ranked in the 30 largest in the world, worthy of a seat at the next COP (Conference of the Parties) summit. This is because the energy expended by the Bitcoin network to fully process a transaction is many times that of a credit card transaction.

But it gets worse. As UK academic Oli Sharpe argues in the video Explaining Bitcoin’s deep problem, the level of difficulty required to solve the PoW algorithm must keep increasing to ensure the integrity of the currency. Furthermore, to maintain integrity, the cost of compute must also represent a sizeable fraction of the value being transferred through the network — again, forcing up the amount of equipment and energy use needed. It is as if the transaction fees once paid to central banks are now being diverted to energy and IT equipment companies. All this translates into more processing time and, therefore, more energy use. A recent Citigroup paper estimated there was a 66-fold increase in Bitcoin energy use from 2015 to 2020. At this growth rate, Bitcoin energy use will soon overtake energy use by the rest of the data center industry combined.

Many in the digital infrastructure industry have shrugged off the cryptocurrency energy problem, viewing blockchain technologies (distributed ledgers) as a technical breakthrough and an opportunity for business innovation. But that may be changing. In Uptime Institute’s recent environmental sustainability survey, we asked nearly 400 operators and vendors about their views on cryptocurrency energy use (see Figure 1). Nearly half (44 percent) think legislation is needed to limit cryptocurrency mining, and one in five (20 percent) think operators should stop any cryptocurrency mining until the energy consumption problem is solved (some say it already is, using alternative methods to secure transactions). 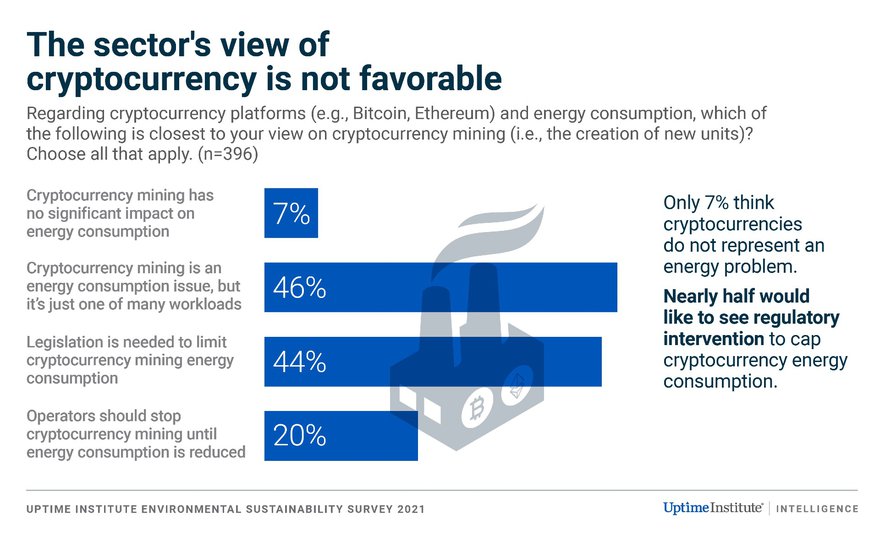 Some may argue that Bitcoin mining uses specialist machines and very little takes place in “formal” data centers and therefore is not a mainstream digital infrastructure issue. But this is too simplistic — for three reasons.

First, all blockchains use IT, processors and networks, and many make use of large IT nodes that are operated in buildings that, if not data centers, are at least Tier 1 server rooms. The public and regulators generally see these as small data centers, and all part of the same serious problem.

Second, there are now thousands of cryptocurrencies and other blockchain services and applications. Many of these are developed and supported by large organizations, running in large data centers, and rely on energy-hungry PoW protocols.

Blockchain services offered by the cloud giants are an example. Amazon Web Services (AWS), Google and Microsoft, for example, all offer blockchain-as-a-service products that use the Ethereum blockchain platform or a variation of it (Ethereum is a blockchain platform, ether is the coin). The core Ethereum platform currently uses the energy-intensive PoW protocol, although there are some less power-hungry versions of the protocol in use or being developed. Ethereum 2, which will use a proof-of-stake (PoS) protocol, will be offered in 2022, and promises to bring a 90 percent reduction in energy use per transaction.

According to its website, 25 percent of all Ethereum workloads globally run on AWS

Ethereum lags Bitcoin in energy use, but its consumption is still very significant. According to Ethereum Energy Consortium data, reported on Digiconomist.net, annualized consumption to support Ethereum stands at 88.8 TWh in November 2021, a four-fold increase in less than a year.

Where is all this processing done? According to its website, 25 percent of all Ethereum workloads globally run on AWS. This either means energy-intensive blockchain workloads are currently running in AWS hyperscale and colocation data centers across the world (it is not clear how much of this is PoW calculating); or that AWS customers using Ethereum-based blockchains are dependent on PoW processing being done elsewhere.

There is a third issue. Many corporations and big cloud services are switching to PoS services because they use so much less energy. But given the growing importance of sustainability and carbon reporting, businesses may also need to understand the energy use of PoS technologies. Although these can be a thousand times more efficient than PoW, they can also be a thousand times more or less efficient than each other (see Energy Footprint of Blockchain Consensus Mechanisms Beyond Proof-of-Work, published by University College London’s Centre for Blockchain Technologies). Fortunately, compared with PoW’s huge footprint, these differences are still tiny.

*There have been several studies of global energy use by IT and by data centers. A recent and insightful paper, by the authors who reached the lower 210 TWh figure, is Recalibrating global data center energy-use estimates (Masanet E, Shehabi A, Lei N, et al. Science 2020; 367:984–986).