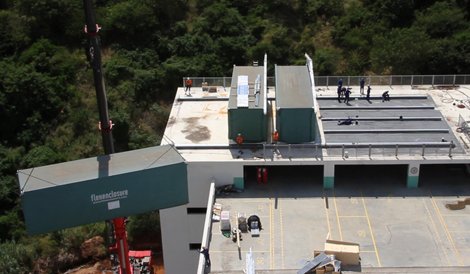 Vodacom – a subsidiary of Vodafone – has already installed a 126 sq m  modular eCentre 35m above ground on a helipad at its regional office in the heart of Maputo which now houses is mission-critical data and telecom equipment.

The new facility, which will provide 500 sq m of open floor space, will be used as Vodacom’s primary national core network facility.

It will be built in Matola, in the industrial zone of Tchumene, early next year, as part of a strategic network rollout program designed to increase network capacity.

“The new data center is designed to capture the subscriber and data traffic growth resulting from this network expansion,” Flexenclosure said.

Each of the 12 modules will be built in Sweden and shipped to the site.

Flexenclosure is building a customised power solution into the modules which will allow Vodacom to take advantage of an existing gas pipeline about 100m away from the facility, which means Vodacom can use an environmentally friendly primary power supply on site.

“Generating electricity using gas-powered generators on site will ensure a power supply that is both clean and guaranteed, with the added benefit of an estimated 40% reduction in CO2 emissions,” Flexenclosure said.

Vodacom Mozambique head of property and product and business development Carita Tissari da Costa earlier told FOCUS that deploying the modular solution helped reduce the amount of time it took for Vodacom to increase its footprint.

“The experience of building a modular data center has been a real eye opener,” Tissari da Costa said.

She said it allowed Vodacom to build out its footprint without making substantial commitments to property, which in most cases in Mozambique is leased by the government.

“If it was bricks and mortar, that would mean moving every brick one by one, and we would have to leave some of our data center investment behind,” Tissari da Costa said.

DCD Intelligence has recently released a report that investigates the costs of modular builds versus those of traditional data center designs. You can view the report here.