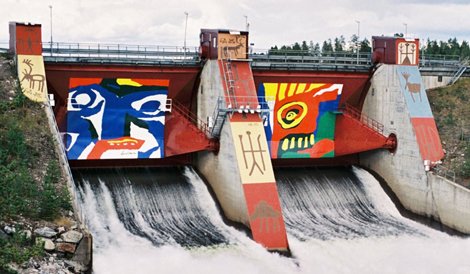 Yesterday FOCUS covered the business development efforts that attracted Facebook to Sweden and Facebook's use of, and challenges with, the local climate, from free cooling and rapid deployment. In our second instalment of our special on Facebook in Luleå, we look more closely at the use of the Rapid Deployment Data Center design for its second Luleå data center and its use of hydropower. You can read Part 1 here.

Facebook’s Luleå 2 data center will be built on the same site as Luleå 1 – land which backs on to a beautiful tree-lined UNESCO World Heritage site. It will look drastically different to Luleå 1 thanks to its Rapid Deployment design. “It looks a bit like something out of Star Wars I think,” Facebook’s overseer for data centers in EMEA and the East Coast US Niall McEntegart says.

Luleå 1 has four halls, each 40,000 sq ft spread over three storeys. Compute equipment is on the bottom, a hot air plenum makes up the middle floor – used for transporting air throughout the building and mixing cold air coming in and exhaust going out – and the top storey contains a full cooling system. Every hall has its own cooling system. The new building constructed using the Rapid Deployment method will be more condense, with only a data hall and small plenum above.

Facebook director of data center design Jay Park took a deep dive into Rapid Deployment in London before FOCUS visited the Luleå site. He said he believes the construction method will eventually reduce the amount of time it takes Facebook to build out its massive data centers by up to ten months.

An artist's impression of Facebook's second data center in Sweden

“With our Stick Built design method the build cost was pretty good – we shaved 24% off what it would cost for leased capacity with this data center design,” Park says. The Stick Built method has been used in different iterations for all Facebook data centers to date, including Luleå 1 and Altoona, its newest US site which is still under construction.

“By deploying a Rapid Deployment Data Center, we not only wanted to reduce cost but shorten the construction time.”

Designed during a ‘hackathon’, RDDC is governed by size. Levels of efficiency in build terms mean less time, money, energy and resources. Getting size down has been integral in reducing the amount of transport required, and to maximize the amount of materials that could be taken in each load.

“We had to take a cross-sectional view inside the data center. If you look at where we have the rack, then above that the cable tray, overhead Power Bus and hot aisle, it is 16ft wide and 14ft high. Something this size is pretty hard to ship. So we looked above the racks at cable trays and the Power Bus – this was only 12 x 6ft. We can premanufacture these and repeat throughout the whole installation. Above the data center space we have the penthouse, where all HVAC equipment is located. We took the mechanics out of the roof and put them at the end of each data center then repeated this on the other side. All our electrical skits and supporting systems will now be in the middle.”

Facebook is really focusing on the framework for this build – everything above the floor. The walls and chassis can be flatpacked (like Ikea) to avoid shipping empty space. The chassis is set upon posts mounted to the floor and the data hall – each with 52 chassis and 13 cold aisles – is then assembled. The width of the hot aisle is set by the pitch at which the chassis are set, and manufactured air handling units are used at grade flanking, removing the need for a supply air penthouse. Construction teams can work on these prefabricated builds in unison once the foundations are laid.

“One contractor can continue to build this thing out and the second can start installing cabinet rows,” Park says.

Even compartments in the data center have been flatpacked. They will be assembled from the floor instead of the ceiling – which means work can start before the roof has been fitted.

McEntegart is excited and nervous about Luleå being the first data center to use the new design method. He says it will pay off. On top of reducing the time to build and cost, he also expects it will add a few additional LEED points to Luleå 2’s certification.

Drowning in power
LEED (the US Green Building Council’s Leadership in Energy and Environmental Design certification) adds to green credentials but, according to McEntegart, nothing can beat a 100% renewable energy source. This is what really attracted Facebook to the Luleå site.

The Lule River, which flows south-east for 460km from the Gulf of Bothnia, generates twice the hydropower capacity of the Hoover Dam and Sweden has taken advantage of this. It transports this green energy across Sweden to its major cities in the south where one-fifth of Sweden’s population lives.

Along the Lule River you’ll find the Harsprånget plant, providing about 977MW, the Porjus and Messaure plants offering more than 460MW each and Vietas, Ligga, Ritsem and Porsi plants, providing between 280 and 330MW. They join others in the region to make up a majority of Sweden’s hydropower supply – which is backed up by two major nuclear plants further south.Hydropower has been produced in the region since 1900 but it wasn’t until the 1950s that Vattenfall and Swedish energy provider ASEA (before it was ABB) constructed the first high-voltage power line in the world – at 400kV connecting Sweden’s south to its hydro supply in the north. This allowed supply to ramp up, as there were more regions that could be connected to the energy source.

Today hydropower makes up roughly 50% of Sweden’s energy mix. Vattenfall VP of business sales Rick Abrahamsson, who also heads up the company’s data center initiative from Luleå, says as production in the region has grown so too has the region’s electrical grid, which now has large amounts of redundancy built in.

“We have 15 power stations on the Lule river today and there are more on other rivers in this region. We have 130kV lines connecting these to the grid, in some places three or four from one power station, and these are all connected to the regional grid. We had to build everything to be redundant because of the mining industry, and before that the paper industry which was extremely reliant on power,” he says.

Facebook receives its supply from a number of providers. Luleå Energy – the local energy company – owns the grid closest to Facebook. Vattenfall provides hydropower to Facebook one step along the chain, with two feeds leading in to Luleå energy. “This is because of the site Facebook chose. If it had have chosen the Boden site that was also on offer it would have had quadruple feeds,” he says.

“We had some issues here with the volcano. We were talking to one executive of a big company. He drew a volcano on a chart and said ‘you were way up the hill but the eruption came and you had to start the climb again. This has changed people’s mind set overnight’.” McEntegart denies the claim.

He instead says: “While I was not involved in the site selection process (he worked for Yahoo at the time), I do know we looked at a number of different sites, in different countries across Europe. In the end a few of these were still in the running. To be honest it came down to the simple fact that we had to make a decision.”

“The main thing about the Luleå site for us was it had this huge amount of power generation right near the site. The Lule River is one of the biggest hydroelectric producers in Europe. “Luleå also made sense from a cost perspective, with long-term power contracts, and long-term stability of supply. If power is generated on your doorstep you don’t have to transport it right across Europe which would mean you lose some through transmission. The energy is also clean. Facebook has committed to using 25% renewable energy by 2015 and this site being 100% renewable in terms of use contributes to that goal.”

When Facebook announced its first 100% renewably powered data center in Luleå  Greenpeace – which has put the data center industry under its watchful eye in recent years – was critical. It didn’t like Facebook’s choice of Vattenfall as an energy provider. It also operates nuclear and coal-fired plants outside of the region.

McEntegart says after discussions between all parties involved, Facebook and Greenpeace are now “friends”.

“You have to realize you cannot change to renewable energy overnight. Data centers are long-term builds. Renewables affect where you locate, how you fit and build capacity. You just can’t flick a switch and change how you operate them,” McEntegart says. “We actually found the Greenpeace thing a bit astonishing,” Abrahamsson adds. “We thought it was really good that we were providing 100% renewable hydropower for Facebook. I think the issue was that Greenpeace did not understand the regional markets – and  that we are 100% renewable in this region. We explained this and things seem much better now,” he says.

In Greenpeace’s latest scorecard for green data centers, Facebook received 49% of the green energy index and an A for renewable energy commitments. It also got an A for energy efficiency and mitigation and B for renewable energy deployment and advocacy. (Apple got 100% while eBay received just 6%.) It is a strong score and something Luleå 2 is only likely to add to as Facebook increases its presence in this small town, and while doing so ensures that business is thriving.