Switch Datacenters will be supplying waste heat from its facilities to warm local homes and businesses at a discounted price.

The company’s ‘Cloud-to-Heat’ project is seeing its AMS2 data center in Woerden, Netherlands, upgrading to direct-liquid-cooling (DLC). As part of the upgrade, the company is replacing gas generator units previously used to heat the company’s office and a neighboring property with heat exchangers that will sell heat from servers instead of using natural gas.

Rather than using air to cool servers, DLC uses liquid-cooled heat sinks to transfer heat away from components, and water used in such cooling techniques is heated to a temperature of 40 to 60°C (86-104°F). The heated water at AMS2 is sent directly to the properties, and the water in the DLC system is recirculated without any additional cooling. The facility site does have simple dry-coolers as backup in case the properties don’t take the heat or a technical issue arises.

Located south of Amsterdam, the AMS2 data center was previously used by Dutch bank ABN AMRO before being acquired by Switch in 2014. It has 5,500 sq m (59,200 sq ft) of floor space and the majority of the facility is leased to IBM. 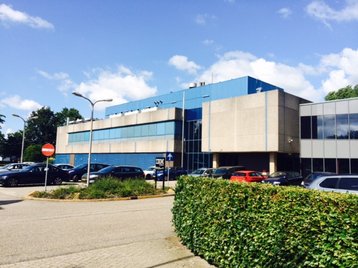 Switch Datacenters CEO Gregor Snip told DCD that 97 percent of the server heat will be captured and delivered to homes and offices, and customers receiving heat this way will gain a 20-30 percent discount on power costs. Snip says the company is aiming to heat over 2,000 homes and two large office buildings. He hopes other providers will follow a similar strategy, especially as data center density increases.

“We believe data centers (with DLC) will help cities in the very near future to achieve their CO2 neutral goals in a sustainable way,” he said. “At the same time, cloud providers receive incentives for the heat production to create the classical win-win.”

As chips reach the limit of Moore’s Law, ever-higher density means higher power and cooling demand. As a result, novel cooling methods are being sought to keep equipment operating and heating costs down. Liquid cooling is becoming an increasingly popular option, with a report from Global Market Insights predict the data center DLC market will worth over $2.5 billion by 2025, up from $750 million in 2018.