Super Micro Computer has deployed over 30,000 Supermicro MicroBlade servers in a Silicon Valley data center with a claimed PUE (power usage effectiveness) of 1.06. Although Supermicro doesn’t name the customer, a Fortune 100 company, it seems highly likely it is Intel, who opened a strikingly similar data center in November 2015 - with a PUE of 1.06.

The installation uses Intel’s Rack Scale Design (RSD), an efficient hyperscale architecture based around silicon photonics which disaggregates servers and memory. Supermicro says the MicroBlade system, available in 3U or 6U, features 14 or 28 hot-swappable MicroBlade Server blades, put together according tocan deliver an 86 percent improvement in power/cooling efficiency with common shared infrastructure, 56 percent system density improvement and a lower initial investment versus 1U servers. 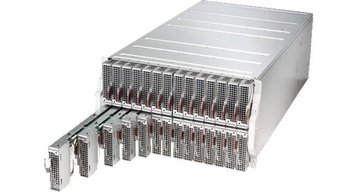 The deployment, described in a Supermicro case study, has 280 Intel Xeon processor-based servers per rack.

Supermicro’s press release doesn’t mention the customer, but quotes Shesha Krishnapura, Intel Fellow and Intel IT CTO:  “A disaggregated server architecture enables the independent upgrades of the compute modules without replacing the rest of the enclosure including networking, storage, fans and power supplies, which refresh at a slower rate.”

While Supermicro did not reveal the company behind the data center, there are several hints that point towards it being Intel. Not only does the Supermicro system use Intel processors and Intel’s Rack Scale Design (RSD), it just so happens to operate a data center with a PUE of 1.06 in Silicon Valley. It is also number 51 on the Fortune 500. 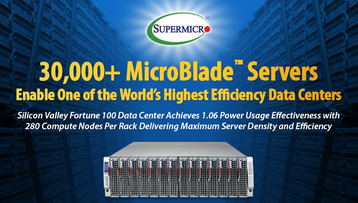 In a tour of Intel’s facility, Data Center Frontier notes that the company’s racks are 9ft tall. Perhaps not so coincidentally, in today’s announcement the president and CEO of Supermicro, Charles Liang, said: “With 280 Intel Xeon processor-servers in a 9-foot rack, and up to 86 percent improvement in system cooling efficiency, the MicroBlade system is a game changer.”

With 9ft racks, Intel moved top-of-rack neworking switches to the bottom of the rack to be easier to reach. With MicroBlade servers, the networking is aggregated into two ports for uplink through an integrated switch, eliminating the need for Top-of-Rack (ToR) switches, entirely.

Still not convinced? Here’s yet another clue - Shesha Krishnapura, quoted in today’s Supermicro release, was photographed by Data Center Frontier in 2015, standing in that very data center, and is said to be overseeing the company’s internal data center operations.

DCD has contacted Supermicro to ask if it is indeed Intel, we will update the article when we hear back.

About the MicroBlade 3U enclosure deployed, according to Supermicro

About the MicroBlade 6U enclosure

About the 8U SuperBlade enclosure

About the 4U SuperBlade enclosure