Researchers at the University of Stanford have tested a passive cooling system that lowers the temperature of water by a few degrees by using radiative panels that absorb heat and beam it directly into outer space.

The panels, made out of a thin layer of silver covered by layers of silicon dioxide and hafnium oxide, emit heat at infrared wavelengths between 8 and 13 micrometers - bypassing the Earth’s atmosphere. 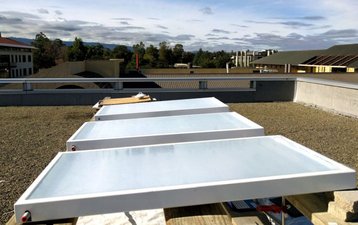 Radiative sky cooling technology has been demonstrated before, but this solution worked effectively in direct sunlight, with minimal electricity usage and zero evaporative loss.

“If you have something that is very cold – like space – and you can dissipate heat into it, then you can do cooling without any electricity or work. The heat just flows,” Professor Shanhui Fan said.

“For this reason, the amount of heat flow off the Earth that goes to the universe is enormous.”

In a research paper published in Nature, Eli Goldstein, Aaswath Raman and Fan write: “Over three days of testing, we show that the panels cool water up to 5 ∘C below the ambient air temperature at water flow rates of 0.2 l min−1 m−2, corresponding to an effective heat rejection flux of up to 70 W m−2.

“We further show through modeling that, when integrated on the condenser side of the cooling system of a two-storey office building in a hot dry climate (Las Vegas, USA), electricity consumption for cooling during the summer could be reduced by 21 percent (14.3 MWh).”

Hoping to commercialize the technology, the trio have set up a new company called SkyCool Systems that says its “vision is to improve the efficiency of all cooling systems by harnessing an untapped renewable resource: the sky.”

While the group did not test the technology on a data center, a press release from the Stanford News Service states it is “particularly excited at the prospect of applying their technology to the serious task of cooling data centers.”

Fan added: “It’s very intriguing to think about the universe as such an immense resource for cooling and all the many interesting, creative ideas that one could come up with to take advantage of this.”

The project was funded by the Department of Energy’s Advanced Research Projects Agency – Energy (ARPA-E) division.