But the project is far from certain

Saudi Arabia has signed a strategic partnership with Greece to build a submarine Internet cable linking the two nations.

The announcement came as part of a wider slew of agreements and memorandums of understanding that came out of Saudi Crown Prince Mohammed Bin Salman's visit to Athens, where he met with Greek Prime Minister Kyriakos Mitsotakis. 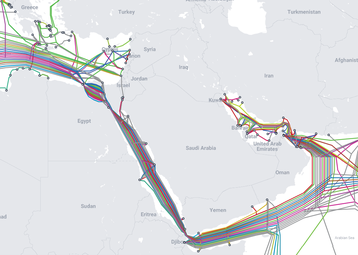 Specifics of the cable were not shared - including capacity, timeline, or route.

Saudi Arabia does not border the Mediterranean Sea, so a cable would have to cross Israel or Egypt - with the latter more likely.

Most submarine cables in the area cross through Egypt, but Google is developing a cable that travels through Saudi territory, across Jordan, and into Israel. However, due to political tensions, the cable is 'technically' two separate cables - Raman in Saudi Arabia and Blue in Israel, so that the nations can pretend it is not the same cable.

Also undisclosed is whether the cable will reach the Greek mainland, or to the Greek island of Crete. The mainland has few direct cables, most notably the 2001 MedNautilus cable connecting Israel to Greece.

But Crete is visited by many of the submarine cables passing through Egypt, most of which also land in Saudi Arabia - including AAE-1, SeaMeWe-3, and the upcoming 2Africa, India Europe Xpress, and Google's Blue Raman cables. The inclusion of the Cyprus Telecom Company in the new cable's consortium would also suggest Cyprus will be included in the cable's route

The Saudi-Greece cable is not guaranteed, as nation-state visits are often accompanied by promises and announcements that do not pass the drawing board. The two countries also promised to work together on green energy and hydrogen.