A lot of money, but generally worth it

The story of Facebook’s data center in Los Lunas, New Mexico is one of competition, of towns decimated by recession, of a fight over corporate profits and state taxes.

But the crux of the story, and that of many other hyperscale constructions, is the issue of what a data center is worth - not just to the company that builds it, but to people that live around it. Huge tax incentives are proffered by local governments to companies like Facebook, Google and Microsoft, but it can often be hard to know how the community has been impacted. 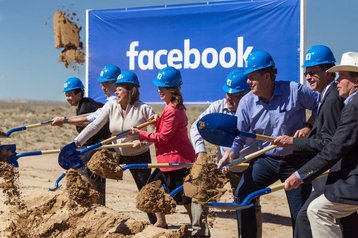 In December - ahead of Facebook breaking ground on its new data center, but several months after Los Lunas and Facebook agreed to the construction, supported by several tax breaks - a consulting firm published a fiscal and economic impact study on the facility, funded by the Village of Los Lunas.

The Albuquerque Journal have obtained a copy of the study, prepared by Californian consulting firm David Taussig & Associates. As of last month, the state’s economic development department has yet to prepare its own economic impact study.

The study takes into account the Local Economic Development Act (LEDA) assistance, but does not look at the cost of water rights or Village infrastructure needed to provide for the project. It also assumes that Facebook will build six data center facilities at the site over the next ten years, although the company has only said that this is something it may decide to do.

Facebook was given $10 million in state Local Economic Development Act funding, plus a gross-receipts tax reimbursement of up to $1.6 million annually and $30 billion in industrial revenue bonds. These incentives were made in an effort to beat Utah, which had also heaped large incentives upon Facebook until an internal revolt caused it to back out of negotiations.

According to the study, and with the aforementioned caveats taken into account, total economic output of the site over the next 10 years is projected to reach $1.88 billion. That includes the temporary impact of the construction, the longer-term impact of the facility, and indirect and induced effects throughout the community.

The study foresees the creation of 5,660 jobs countywide, leading to $234.77 million in wages.

Over ten years, with six buildings, it expects $21.71 million to be contributed to New Mexico’s general fund. Los Lunas should net just under $28 million in gross receipts tax revenues in that time frame.

In the summary, the report was mostly positive in its outlook: “Although the project is expected to require a considerable amount of public infrastructure, the project is also expected to generate significant new revenues for the Village of Los Lunas.”

It is important to note that plans can change, as can the number of jobs at a Facebook facility.