DCEngine offers easy path to SDN, building upon the work of the Open Compute Project

Radisys, a provider of specialized equipment for carrier networks, has launched a server system that conforms to the OpenRack standard developed by the Open Compute Project (OCP).

The DCEngine ships in an enclosure adapted to the needs of telecommunications service providers, and supports just one type of compute node, which can be configured with a choice of CPUs to serve different functions. The range also includes a storage server and a Top-of-Rack switch.

The product is intended to serve as a foundation for software-defined networking architectures, as more and more telecommunications operators replace expensive, proprietary equipment with commodity hardware. 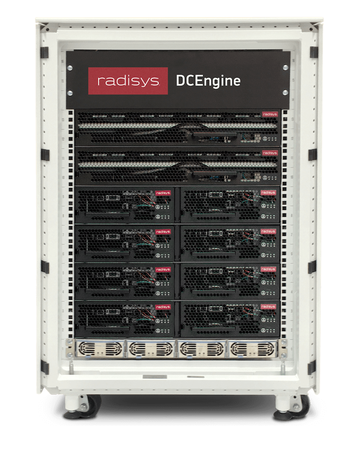 DCEngine is based on Radisys’ CG-OpenRack-19 specification, which was accepted by the OCP in December 2016. The rack is a familiar 19-inch design, with added features like electromagnetic shielding and improved seismic stability.

It also delivers an in-rack Uninterruptible Power Supply (UPS) option – a novel approach to power protection based on small Li-ion cells, and promoted by service providers including Microsoft.

The product is being positioned as complimentary to the Open CORD project – which stands for Central Office Re-Architected as a Data Center. Unlike Open Compute, which focuses on hardware specifications, Open CORD is a software-driven project that combines NFV, SDN, and the elasticity of commodity clouds – namely OpenStack - to bring datacenter economics and cloud agility to the telco central office.

“Within CORD, we’d like to have a reference architecture that has an open choice for everything, even if it’s not the final choice, including the hardware,” Andrew Alleman, CTO at Radisys, told DCD.

“Also, when you have smaller vendors playing, and you’re mixing and matching, the openness of the solution takes away some of the risk for them.”