Make supercomputers while the sun shines

The bipartisan 2017 fiscal year budget agreement, set to go in front of the US Congress this Thursday, includes a small increase in funding for the Department of Energy - which is behind much of the nation’s supercomputing efforts. Update: Congress and the Senate have voted for the bill, which now goes in front of President Trump.

But, while President Trump is expected to sign the nearly $1.2 trillion federal spending bill and avert a government shutdown, it only serves to push many of the administration’s proposed cuts to the end of September. 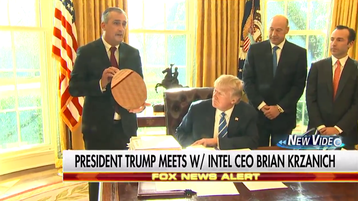 The bill includes $5.4 billion for the Department of Energy’s science programs, a $42 million increase over the 2016 budget (less than one percent). The advanced computing budget also saw an increase of 4.2 percent.

The funding “shows that high-performance computing is still a priority for Congress,” Peter Harsha, director of government affairs at the Computing Research Association, told ComputerWorld.

In an interview with Bloomberg, Trump said he was “very happy” with the overall deal, which made some concessions to the President’s agenda - such as an increase in military and border security spending - but failed to enact the sweeping cuts Trump had promised, or give any funding to the proposed US-Mexico border wall.

“Everything we got in this deal … lines up perfectly with the president’s priorities,” White House budget director Mick Mulvaney said.

White House spokesman Sean Spicer added: “We couldn’t have our entire way on this, but we’re five months away from having a 2018 budget, and I think the president’s priorities will be reflected much more in that.”

The 2018 budget, which will begin October 1, is expected to be detailed later this month. But in a blueprint budget document, the administration outlined plans to cut $900 million from the DoE’s science funding and to completely eliminate the Advanced Research Projects Agency-Energy.

To pass these cuts, the administration will face many of the same challenges that stymied its efforts to shape the budget this week, and so it is important to note that the budget change may not come into force. As for scientists and researchers at the Department of Energy, many have been left in an uneasy limbo.

“I think most scientists are facing possible cuts,” Scott Black, an ecologist and executive director of the Xerces Society told OPB.