Adjusting the way operating systems handle unused capacity could help reduce the operating costs of a data center by as much as 25 percent, according to research conducted by the Australian National University (ANU) and Microsoft.

The team of researchers tweaked the OS they were using, which handled search requests, enabling it to relegate non-time critical tasks during periods of high demand, and take them on again when the system was in an idle state.

They said that such systems often spent considerable time waiting to receive search requests, during which periods they could be handling less demanding tasks, thereby releasing processing capacity that would otherwise have been used in competition with time-critical tasks.

“The [internet] companies have no control of when users will request a search, so they have large server capacity that is mostly idle,” explained Xi Yang, a PhD student at the ANU Research School. 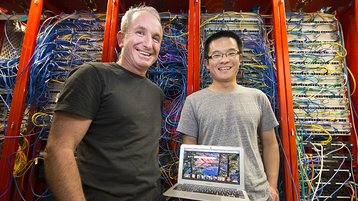 Yang worked with Professor Steve Blackburn of ANU Research School of Computer Science and Dr Kathryn McKinley of Microsoft on the project.

A technique called ‘simultaneous multi-threading’ is available on high-end hardware, McKinley said, but many companies turn off this feature, because without using the same approach employed in the research project, sharing wreaks havoc with the responsiveness of interactive services, such as delivering search results.

“With our new fine grain control hardware control, we can substantially improve the efficiency of data centre servers while achieving the same responsiveness,” she said.

“This work has the potential for enormous impact in data centres - it could save over 25 percent of the data centre energy bill for these companies, a huge win.”

Yang added: “We have analysed the operating system’s performance 100 times more closely than before, which is crucial, because much of the activity that occurs inside a computer happens at very high frequencies.”

“The techniques are extremely easy to implement on current hardware. In some cases that we studied, the new techniques made a server nine times more efficient.”

The idea for the project was apparently borrowed from the Grimm Brothers’ 1806 fairy tale titled The Elves and the Shoemaker, which told the story of how elves used a shoemaker’s tools at night to manufacture shoes.