Instead, it wants you to buy the significantly more expensive Tesla

The company claims that the move was made as GeForce and Titan were not built with data center deployments in mind, but many see it as a way of ensuring customers pay for the similar, but more expensive, Tesla GPU line.

What they don’t know won’t hurt them 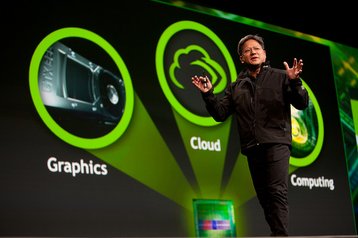 The updated end-user license agreement (EULA) states: “No Datacenter Deployment. The software is not licensed for datacenter deployment, except that blockchain processing in a datacenter is permitted.”

After some customers raised concerns on Reddit, the company told CNBC in a statement: “GeForce and Titan GPUs were never designed for data center deployments with the complex hardware, software, and thermal requirements for 24x7 operation, where there are often multi-stack racks.

“To clarify this, we recently added a provision to our GeForce-specific EULA to discourage potential misuse of our GeForce and Titan products in demanding, large-scale enterprise environments.”

A spokesperson added: “We recognize that researchers often adapt GeForce and Titan products for non-commercial uses or other research uses that do not operate at data center scale. Nvidia does not intend to prohibit such uses.”

Competitor AMD’s software has been less successful, but it is trying to catch up. The company hopes to gain support for its Radeon Instinct family, a hardware and software stack built around the Radeon Open Compute Platform (ROCm, previously known as the Boltzmann Initiative).

Last summer, AMD partnered with Baidu to work on optimizing Radeon Instinct GPU software in the Chinese tech giant’s data centers. The next month, however, Baidu - along with Alibaba and Tencent - announced it would deploy Nvidia Tesla V100 GPU accelerators.

YaQin Zhang, president of Baidu, said at the time: “By leaning into the most advanced AI technology available, we are accelerating the application of AI to create more opportunities for our customers and society as a whole.”

While Nvidia does not allow other companies to use its GeForce GPUs in data centers, it may not be following its own advice. Last year, the company announced ‘GeForce Now,’ a cloud-based gaming service offering access to GTX 1060 and GTX 1080 based virtual machines. It currently operates the platform from eleven locations - each presumably involving data centers.