Linking Peninsular Malaysia and the states on the island of Borneo

The new cable system spans over 3,800 kilometers (2,361 miles). The project was established as a public-private partnership (PPP) between Telekom Malaysia (TM) and the Malaysian government through the Malaysian Communications and Multimedia Commission (MCMC). The objective is to enhance the connectivity between Peninsular Malaysia and East Malaysia, located across the South China Sea on the island of Borneo. 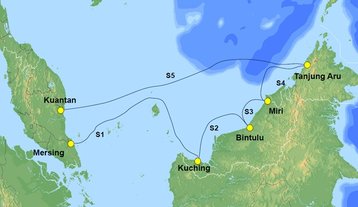 SKR1M lands at six locations: Kuching, Bintulu, Miri, and Kota Kinabalu on East Malaysia, and Kuantan and Mersing on the Malay Peninsula.

The submarine cable system utilizes 100Gbps wavelength technology with an initial capacity of 4Tbps, which could be upgraded to 12.8Tbps in the future.

“[SKR1M] is part of the Government’s initiatives via MCMC to increase the capacity of high-speed broadband and data traffic between Peninsular Malaysia and Sabah and Sarawak,” Datuk Seri Panglima Dr Mohd Salleh Tun Said Keruak, minister of communications and multimedia for Malaysia, said.

“This is among the measures which the Government is undertaking to improve the socio-economic status of people in Sabah and Sarawak through ICT adoption and broadband connectivity.”

NEC is no stranger to the region, having successfully completed projects such as the Singapore to Sri Lanka segment of the South East Asia-Middle East-Western Europe 5 (SEA-ME-WE 5) submarine cable system.

Among other projects, NEC is currently developing the Indonesia Global Gateway Cable System (IGG), an optical submarine cable system to link up multiple cities across the Indonesian archipelago, and HK-G, a 3,900km submarine cable between the data center hub of Hong Kong and the island of Guam.