Japanese telecommunications and IT giant NEC has begun construction of the first submarine cable to directly link Africa and Latin America.

The company is building the 6,200 km South Atlantic Cable System (SACS) for Angola Cables, a wholesale telecoms operator that focuses on developing the regional market.

SACS is expected to be ready in the middle of 2018. At the moment, all traffic exchanged between Angola and Brazil has to be routed either through Europe or the USA. NEC hopes that the new cable system will increase bandwidth and decrease latency between the two countries, advancing international trade and economic growth on both continents. 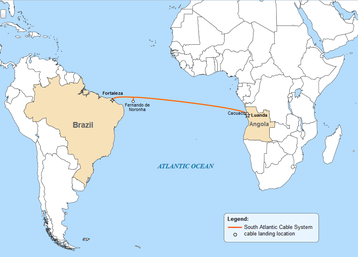 Angola Cables was established in 2009 as a joint venture between five national telecommunications companies: Angola Telecom, Unitel, MSTelecom, Movicel and STartel. Its first project was a landing station for the $650 million West Africa Cable System (WACS) which linked South Africa and the UK, and came online in 2012.

NEC, a Japanese conglomerate that makes everything from PCs to military radar systems, has been laying submarine cables for the past 40 years, and has built up considerable expertise in this area.

The SACS project will cost $160 million and connect Luanda in Angola with Fortaleza in Brazil across the floor of the South Atlantic. In the future, the cable system could be linked to another cable, landing in Miami, enabling direct connections between Angola and the USA.

SACS will offer initial capacity of 40Tpbs, transported across four fiber pairs and 100 wavelengths. It will feature Software Defined Networking technologies to help manage the bandwidth.

“Our main objective is to improve the quality of communications between Africa and the Americas, creating a totally new route in the south hemisphere, providing term and peak capacity product offerings and support for the region’s expanding data requirements of today and for tomorrow,” said Antonio Nunes, CEO of Angola Cables.

“SACS will be constructed using state-of-the-art technology, with 100G-coherent design for low latency, reliable delivery for even the most demanding bandwidth needs and direct data center to data center connectivity across the Atlantic.”