The Google of South Korea is upping its cloud game

According to Platum, the facility will start offering public cloud services in the second half of 2020. 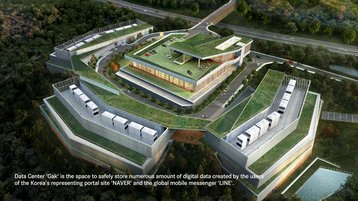 Get with the program

Naver, often referred to as ‘the Google of South Korea,’ was established in 1999 as the first Korean web portal to develop its own search engine. The company has been successful at keeping its competitors at bay by fusing the latest technologies with decisively Korean aesthetics. It also enjoys informal support of the Korean government.

Naver was the first Internet company in Korea to build and operate its own data center, the ‘Gak’ facility (pictured left) in Chuncheon, Gangwon Province. It was designed to resemble traditional rice terrace farms and is listed in our Top 10 beautiful data centers.

Now, the company is expanding with a new facility built to power the public cloud platform it launched in April. Naver Cloud Platform already offers 30 basic infrastructure services related to computing, data, security and network, and promises to be price competitive with both AWS and Microsoft Azure.

The land for the upcoming data center has already been acquired, and the project is expected to cost a further $420 million over three years.

“The company’s ability to quickly and accurately store, analyze, and process huge amounts of dynamically moving data will be the most important factor for success in the future,” commented Weon-gi Park, CEO of Naver Business Platform (NBP). “By investing in the new cloud data center, we will be able to further strengthen our technology leadership in the AI era.”