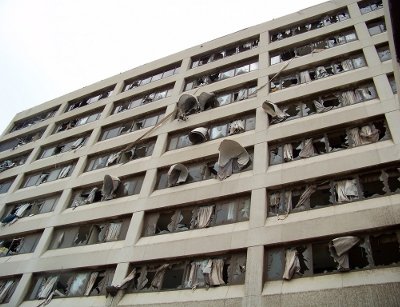 Two of the buildings destroyed by the deadly tornado that ripped through Joplin, Missouri, on 22 May were a hospital and an adjacent data center that was serving it.

St. John's is part of the non-profit Sisters of Mercy Health System, also referred to as Mercy.

Luckily, all of the most important medical data the data center used to house had been moved to a new centralized data center weeks before the disaster struck.

Mercy recently revamped its IT, going from multiple disparate systems to a centralized one that consists of a large data center at its headquarters in St. Louis, Missouri, and 13 "satellite" hospital data centers in nearby states, according to a video produced by APC, one of the vendors involved in setting up the new data center. (Click here to see the video)

Majority of patient data, hospital records keeping, registration scheduling and pharmacy applications were migrated to the centralized data center, according to Information Management. While the onsite data center had a "few dozen" legacy servers, imaging equipment and older patient information sources, none of the data was mission-critical.

Efforts are underway to recover some historical data on back-up tapes and drives the data center housed.

St. John's switched to the new electronic health record (EHR) system on 1 May. Following the tornado, Mercy set up a 60-bed mobile hospital, which used the new system to track patients' medical histories.

In a statement released by Mercy, McCreary said: "If the tornado had hit a month earlier, before installing the electronic health record system in Joplin, St. John's would not have been able to bring up our mobile hospital within a week's time. We still would not be operational at this point.

"Today, patients have continuity of care across all of our physician locations and the new St. John's Mercy Hospital, and connection to the entire Mercy health system, because of our EHR and our ability to quickly re-establish communication services."