NTT, Japan’s National Institute of Informatics and the University of Tokyo are developing a quantum computing device that exploits the properties of light, known as the ‘Quantum Neural Network.’

The system is not a universal quantum computer, like those being developed at Google and IBM, but instead seeks to solve combinatorial optimization problems at a rate hundreds of times faster than classical computers. 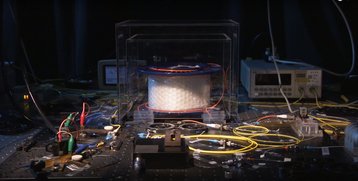 The system consists of just a few elements - a one kilometer long optical fiber loop, a phase-sensitive amplifier (PSA), and a Field Programmable Gate Array (FPGA). In a video which can be seen below, NTT Basic Research Laboratories explains: “The PSA receives Pump Light and uses its energy to amplify light. Only light whose wavelength is twice the wavelength of the Pump Light is amplified here. The PSA most efficiently amplifies lights with phases 0 or π relative to the Pump phase.

“With this system, pulses of Pump Light are input into the PSA, the PSA then outputs noise optical pulses, varying randomly in phase from 0 to 2π. We intentionally start with random phases.

“Using the measurement result of optical pulses, the FPGA creates a new pulse according to a theoretical model called the Ising Model, and superimposes it on the original light pulse. As a result, the pulses affect each other to have either the same phase or the opposite phase. The FPGA repeats this process each time the light pulse circles the loop. As a result, due to the effects of the PSA, each pulse gradually approaches either zero or π. When it is determined to be either zero or π, we have the computation result.”

Researchers oulined a scenario where the QNN could be effective - in an example, it had to divide people into two groups, but avoid placing people who do not get along into the same group as much as possible.

The system was given a dataset of 2,000 people and 20,000 incompatible combinations which it had to sort. Each person was represented by a light pulse, while the two groups were represented as zero and π. “Then we enter the incompatible relationships into the FPGA and begin the computation.”

The calculation took 0.005 seconds, NTT said: “The QQN compares the huge number of combinations all at once and determines the grouping in just an instant.”

The system, which does not require elaborate cooling systems like superconducting quantum computers, consumes just 1kW of power.

“We will seek to further improve the prototype so that the quantum computer can tackle problems with near-infinite combinations that are difficult to solve, even by modern computers at high speed,” project head, Stanford University Professor Emeritus Yoshihisa Yamamoto said.

The prototype system will be available to test for free from November 27. In addition, April 2018 will see Japan launch a a ten-year, 30 billion yen ($267 million) quantum research initiative as it joins the race currently led by the US and China.