Satellite operator Iridium Communications has partnered with Amazon Web Services for the development of Iridium CloudConnect, which aims to be the "first and only" satellite cloud-based solution offering global coverage for Internet of Things applications when it launches in 2019.

The news comes just weeks after job listings outed Amazon's off-planet ambitions, with the company teasing "a big, audacious space project" that it is working on. 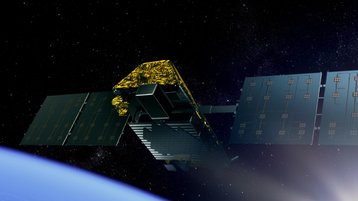 An Iridium NEXT satellite – Iridium Communications

"Iridium CloudConnect will completely change the speed at which a satellite IoT solution can be deployed and will allow existing AWS customers to keep everything the same on the back end, while opening up the opportunity to quickly expand their coverage," Iridium CEO Matt Desch said.

"This is a major disruption for satellite IoT. Costs will drop, time to market will speed up, risk will be reduced, and AWS IoT customers that choose Iridium CloudConnect can now enjoy true global connectivity for their solutions."

CloudConnect will make use of Iridium's 66 crosslinked satellites, a constellation of systems which are currently being replaced by Iridium NEXT satellites in a $3bn upgrade of the decades-old system. Across seven launches, launch provider SpaceX has already delivered 65 new satellites to Low Earth Orbit (LEO), with 10 more satellites planned for later in the year (nine satellites serve as orbiting spares).

Iridium says that it already has 630,000 active IoT devices using its space network, with subscribers growing at a compounded annual growth rate of approximately 19 percent over the last three years. It expects that to grow further with the roll out of CloudConnect, and through its AWS partnership.

"Easily this could expand to tens of millions of devices," Iridium CEO Matt Desch told CNBC. "We're really covering the whole planet... with terrestrial networks today it's still only 10 percent or 20 percent [of the Earth]. Everybody today can connect pretty easily with very little effort. Now that Amazon has put our language into the cloud platform, they can extend their applications to the satellite realm."

Desch said that he expects CloudConnect to first cater to large products like agricultural equipment or cargo ships, but said "it will move downwards into smaller and smaller vehicles, such as drones."

The cost of progress

While the Iridium constellation, launched in 1998, is still in use - and has proved invaluable to the US military, and satellite phone operators - the economics behind the original business proved unsustainable.

For the system to work, all the satellites needed to be in orbit, requiring huge upfront costs totaling $6 billion - much of which was provided by Motorola - that did not immediately generate returns. "Even though Iridium offered superior services, consumers did not flock to purchase satellite phones. When compared to traditional services, consumers found that Iridium’s costs (i.e., expensive proprietary equipment and high service fees) outweighed satellite phones’ benefits (i.e., reliability and access)," a Journal of Information Technology Management case study notes.

It took just nine months after the Vice President of the United States Al Gore made the first phone call (to his wife Tipper Gore) for the company to declare Chapter 11 bankruptcy.

All, it seemed, was lost, with Motorola declaring in 2000 the satellites would be de-orbited. But then the Pentagon stepped in, providing a $72 million, two-year contract to serve its 20,000 US government users.

To save the system, the government also approved one of the largest fire-sales in history, allowing the business to be sold for just $25 million, erasing more than $4 billion in debt.

Iridium Satellite, LLC, a new company formed by private investors took over the business, which - with the debt cleared - was able to operate as a financially successful company.

It became Iridium Communications in 2009 after a merger with a special purpose acquisition company (GHQ) created by the investment bank Greenhill & Co, and remains a major communications backbone for businesses operating in remote regions, as well as the US Department of Defense.