One of Europe’s largest data center providers has announced that it will be opening its third Dublin-based facility on March 3rd. According to Interxion’s site, the carrier-neutral  data center will offer 2,300 square meters (approx 24,750 sq ft) in phase one, suggesting that the company has plans for expansion in the future. 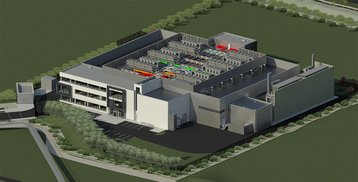 The company advertises power densities of up to 2kW per square meter, with 4.6MW available for the entire data center.

The facility offers low-latency connectivity to European markets and supports over 40 fixed and mobile carriers, ISPs and CDNs.

Interxion boasts a total of 42 data centers across 13 European cities, access to emerging markets and landing points for continental submarine cables. The Dublin sites are strategically placed to provide a bridge between European and American markets.

The company announced a 7 percent revenue increase in the third quarter of 2016 and is due to announce its fourth quarter and full 2016 report on March 1st 2017.