And Peter Thiel tries to get Silicon Valley behind Trump

President-elect Donald Trump has picked 16 business leaders as members of the President’s Strategic and Policy Forum - a group that will consult him as he works to ‘Make America Great Again.’

IBM’s Ginni Rometty is the only tech leader in the group, with the CEO previously having written an open letter to Trump explaining how IBM could help his plans.

“This forum brings together CEOs and business leaders who know what it takes to create jobs and drive economic growth,” President-elect Trump said.

“My administration is committed to drawing on private sector expertise and cutting the government red tape that is holding back our businesses from hiring, innovating, and expanding right here in America.”

The Forum will be chaired by Stephen A. Schwarzman, Chairman, CEO, and co-founder of Blackstone, the largest alternative asset management company in the world, with $361 billion under management.

Schwarzman told the Financial Times: “The election was stunning in its ferocity and somewhat uncivilized, and I had trouble relating to that, but now we have come to a different place and must come together to make the country work. That is the impulse of all of the people on this forum.

“This is a predominantly pro-business, pro-capitalist administration with an objective of not only having business do well but having the middle class and lower-middle class of this country do appreciably better, economically.”

Also part of the Forum is Larry Fink, chairman and CEO of BlackRock, the world’s largest asset management company with $5.1 trillion under management. Fink was heavily predicted to be Hillary Clinton’s pick for Treasury secretary had she won, with Clinton advisor Cheryl Mills having joined the company in 2013.

Before being announced as a member of the Forum, but after Trump’s victory, Fink told Nikkei: “The number one phenomenon for the next five to ten years will be addressing the anger felt by people whose jobs are under threat from technology.”

Whether Rometty will serve as a defender of such technologies - which include Watson, IBM’s own artificial intelligence engine that aims to reduce the need for some jobs - is unclear.

In her original letter to Trump, Rometty steered clear of the topic of AI-driven unemployment, instead touting the benefits it could bring to the healthcare industry. But the overall message of efficiency and cost-cutting within government that Rometty offers, and Trump said he wants to achieve, may only be possible with technology replacing some jobs.

For example, Rometty wrote: “Eight years ago, IBM helped lead an effort to identify $1 trillion in savings the federal government could achieve through using advanced data analytics, data center consolidation, and the use of cloud technologies to improve the cybersecurity of key government systems.”

In a 2008 letter to the White House by the Technology Council (of which IBM is a part), the group said: “IBM developed the Automated Postal Center (APC) for the U.S. Postal Service, a self-service kiosk which meets the needs of customers not able to go to the post office during regular business hours. The APC provides at least 80 percent of services available at the staffed counter, reducing line wait times for customers and freeing up staff for more complex transactions. Revenue generated on the APCs surpassed $1 billion in 2007.” 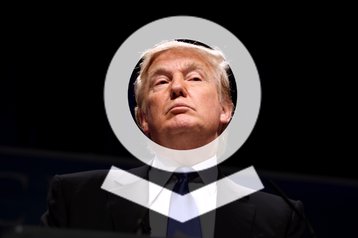 Rometty may end up as one of the few voices around Trump actively promoting technology. Silicon Valley had shunned Trump prior to his election victory, and he has mostly returned the favor since.

Peter Thiel was one of the few members of the Californian tech community to actively support Trump, and is now part of the President-elect’s transition team. Thiel, head of big data company Palantir and a member of the board at Facebook, has reportedly been traveling around the Valley looking for those willing to join the administration - but has had mixed success.

So far, Thiel has brought on Trae Stephens, a Principal at Thiel’s venture capitalist firm Founders Fund and a one-time Palantir employee. Stephens is believed to be helping draft Trump’s security policies, despite the fact that Palantir has several ongoing contracts with the military and intelligence agencies.

Zenefits CEO David Sacks is also thought to have joined the team, stepping down from his role as head of the cloud-based software company. Sacks and Thiel previously co-authored The Diversity Myth, a controversial look at multiculturalism on college campuses.

Despite these recent hires, Trump’s views on technology, digital infrastructure and data remain mostly unknown. And, while partnering with any US administration is bound to be lucrative, many remain wary of being seen as Trump’s supporters.

After Rometty’s open letter to Trump was published, a senior content strategist at IBM publicly resigned. Elizabeth Wood said: “The company’s hurry to do this [letter] was a tacit endorsement of his position, and has signaled to me something very important about IBM’s values: a willingness to legitimize threats to our country for financial gain.”

All the members of the President’s Strategic and Policy Forum: