The company promises a 50-qubit machine accessible via cloud, but offers no specifics

IBM hopes to build the first commercially available, generic-purpose quantum computer ‘in the next few years’, aiming for a 50-qubit machine.

The company has announced plans to develop a suite of quantum systems and services, to be delivered via the IBM Cloud platform under the newly established IBM Q brand.

IBM will also provide tools to build applications that combine quantum and classical computing, without the need for a deep background in quantum physics.

“IBM has invested over decades to growing the field of quantum computing and we are committed to expanding access to quantum systems and their powerful capabilities for the science and business communities,” said Arvind Krishna, senior vice president of Hybrid Cloud and director for IBM Research.

“Following Watson and blockchain, we believe that quantum computing will provide the next powerful set of services delivered via the IBM Cloud platform, and promises to be the next major technology that has the potential to drive a new era of innovation across industries.”

Pie in the sky 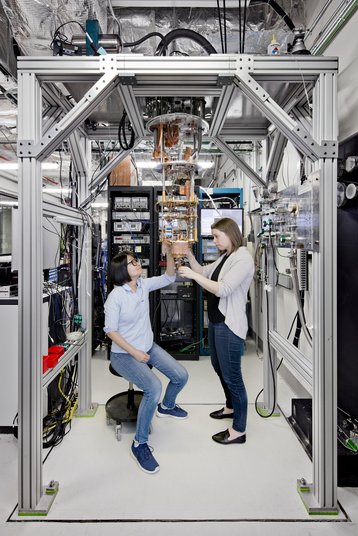 Quantum computers can carry out calculations using quantum bits or ‘qubits’. Because quantum states can be superposed, qubits can measure both ‘1’ and ’0’ simultaneously – just as the famous cat in Schrodinger’s Paradox can be both alive and dead because it is isolated from the outside world in a coherent quantum state.

IBM says it wants to build the first “universal” quantum computer – the company is clearly trying to highlight a distinction between its technology and machines offered by businesses like Canada’s D-Wave Systems.

D-Wave has been selling “the world’s first commercially available quantum computer” since 2011. Its approach relies on quantum annealing paradigm and some of its early customers include Google and NASA. However, D-Wave technology has been widely criticized as not representing a ‘true’ quantum computer, and the jury is still out on the value of quantum annealing in computation.

IBM has already built a five-qubit quantum computer, and this machine will become the foundation for future projects, with plans to release a new API to enable developers to experiment with the hardware as part of the IBM Quantum Experience.

Later this year, IBM will release a full Software Development Kit for users to build simple quantum applications and software programs. The company will also continue working with academic institutions to leverage the IBM Quantum Experience as an educational tool for students.

“For the Fall 2016 semester of the MITx Quantum Information Science II course, we featured IBM’s Quantum Experience as part of the online curriculum for over 1,800 participants from around the world. They were able to run experiments on IBM’s quantum processor and test out for themselves quantum computing principles and theories they were learning.”

IBM is not the first organization to offer remote access to a quantum computer: in 2013, University of Bristol in the UK hooked up its own two-qubit processor to the Internet as part of a project called Qcloud.