But overall revenues for the business continue their decline

IBM had considerably increased its revenues from services like SoftLayer and BlueMix in 2016, but saw the overall income continue to fall for the 19th quarter in a row.

The company has published the financial results for the fourth quarter and the entire 2016, showing its cloud revenues grew to $13.7 billion, a 35 percent increase year-on-year. More than half of the money ($8.6bn) was contributed by IBM’s as-a-Service portfolio.

At the same time, net income from continuing operations for the twelve months ended with December was $11.9 billion, compared with $13.4 billion a year ago.

Despite its less-than-stellar results, IBM had managed to beat analyst forecasts, due in large part to the performance of its cloud services, analytics and ‘cognitive solutions’ like Watson. 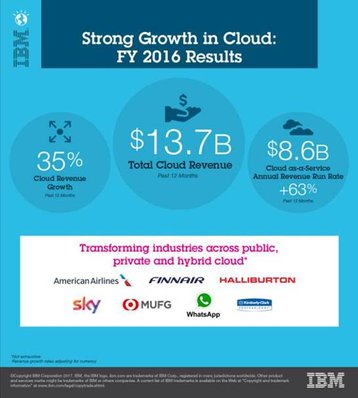 In 2016, IBM considerably expanded its public cloud data centers, opening new facilities in places like Norway, South Africa and the UK. In total, IBM Cloud is now accessible from more than 50 locations across six continents.

The company has said that while the first phase of its cloud deployment was focused on cost savings, it has now entered the innovation phase – delivering a mix of public, private, hybrid and industry specific cloud solutions.

“In 2016, our strategic imperatives [cloud, analytics, mobile and social] grew to represent more than 40 percent of our total revenue and we have established ourselves as the industry’s leading cognitive solutions and cloud platform company,” said Ginni Rometty, IBM chair, president and CEO.

“IBM Watson is the world’s leading AI platform for business, and emerging solutions such as IBM Blockchain are enabling new levels of trust in transactions of every kind. More and more clients are choosing the IBM Cloud because of its differentiated capabilities, which are helping to transform industries, such as financial services, airlines and retail.”

The cloud business is likely to continue outperforming the rest of IBM: in the press release, the company quoted a Forrester survey of 1,000 clients that found that over the next 12 months, 38 percent are planning to build private clouds, 32 percent will invest in public clouds and 59 percent said they would be adopting a hybrid cloud model.