Companies building massive data centers in Denmark are falling short of contributing to the country's green ecosystem, according to a survey by local engineering publication Ingeniøren.

Of the six facilities being built in the Nordic data center hub, only Facebook has plans to connect its data center in Odense to a local district heating system, feeding the country's renewable supplies by replacing the fossil fuels normally required.

The company recently announced that it would be building a second data center in Esbjerg, though it didn't say whether it would include a heat reuse system.

All take no give 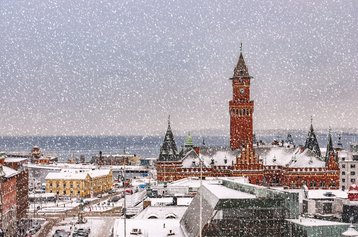 Others, such as Apple, have chosen remote locations requiring costly new infrastructure to connect to district heating systems - making this unlikely, but not impossible, according to Social Democrats MP and energy rapporteur, Jens Joel.

Christian Ibsen, director of Danish think tank and climate-neutral advocate, Concito, said that although it is positive that companies have poured investment into the country, "data centers increase Denmark's energy consumption quite violently."

"Therefore, we should ensure that they only use additional green energy and that the surplus heat is being used to replace fossil fuels," he said.

There are currently no legal requirements for data center operators to contribute to the renewable energy pool in Denmark, despite being a location of choice for its advanced green energy infrastructure, as well as potential cost and energy savings to be made on cooling.

But other Nordic cities like Stockholm have shown that given the right conditions, data centers can be a renewable resource as well as a consumer.

The interaction between digital infrastructure and urban environments, and how to integrate data centers into energy networks was a conversation topic at last week's DCD>London event, and will be central to our Energy Smart event in Stockholm next year. For more information, or if you would like to join us, click here.