Cloud28+ already offers more than 680 services hosted in the EU

Following three months of beta testing, Hewlett Packard Enterprise has officially launched Cloud28+, a catalogue that brings together services from more than 150 European cloud providers, all based on the OpenStack platform.

Customers can choose from 680 different services delivered across the EU, including Infrastructure-as-a-Service, Platform-as-a-Service and Software-as-a-Service. Additional categories and vertical solutions will be added in the coming months.

HPE plans to eventually spin off Cloud28+ as a completely independent non-profit organization, governed by its members. 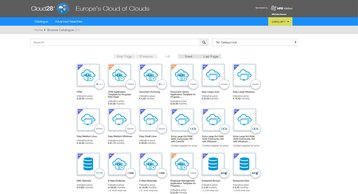 Cloud28+, named after the 28 countries of the European Union, is a federated community of service providers, resellers, ISVs, developers, government entities and end-users.

It offers an online, aggregated catalogue of cloud providers, enabling customers to choose services that are tailored to their specific business requirements. Customers can also choose services based on the geographic location of data centers that host them, since data residency is an issue of particular importance in the EU.

On the Cloud28+ portal, different cloud providers can be compared by price, SLAs or their data center certificates.

Interestingly, the platform also gives IT departments an opportunity to generate revenue and become cloud providers themselves, by offering access to a portion of their on-premise infrastructure.

However, in order to be listed on the Cloud28+ website, cloud vendors are required to commit to Helion – HPE’s own distribution of OpenStack. Members don’t have to be running Helion on day one - they will get up to 12 months to transition to HPE’s platform.

“The launch of the Cloud28+ catalogue is an important milestone on the journey to a European Digital Single Market,” said Xavier Poisson, Hybrid IT vice president for EMEA at HPE.

“Cloud services are fundamental for the growth of the digital economy, and now customers across the EU’s 28 member states and beyond have a single source of hundreds of cloud services that enable them to transform to a hybrid infrastructure.”

Becoming a member of the Cloud28+ community is free, and HPE says more than 1,000 organizations have already registered to use it upon launch.