Greenpeace names Cisco and Google as green IT leaders 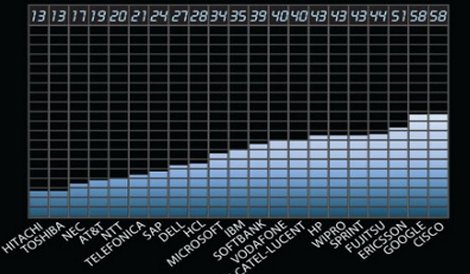 Google and Cisco have come equal first in Greenpeace’s annual list that ranks IT and telco companies based on their leadership in green IT, taking into account in-house energy management and contributions to the wider green economy.

It is the sixth time Greenpeace has compiled its Cool IT Leaderboard, which looks at 21 global leaders in the space covering market solutions that can help customer’s reduce energy use, internal energy footprint and their advocacy of new governmental policies encouraging the adoption of renewable energy and energy efficiency.

It was not the first time Google has topped the list. In February 2012 it came first and was closely followed by Cicso, then Vodafone, Ericsson, Fujitsu and Softbank.

This year Ericsson ranked third, Fujitsu fourth and Sprint, Wipro and HP all tied for fifth.

Companies such as Facebook, Amazon and Apple, who have also made headlines for their focus on green data centers, are not included in the table “because their operations are not broad enough to be compared to companies who offer energy solutions to climate change as core aspects of their business model,” Greenpeace said.

Google
Google’s clean energy investments now top more than US$1bn (since 2010) and Greenpeace said it has also challenged the IT sector to work with them to bring more renewable energy on to the grid.

Just this week Google, while announcing a new data center expansion in North Carolina, said it is working with Duke Energy to develop a program for large companies to purchase renewable energy with encouraging tariffs for large energy users.

Greenpeace could see this as a major move forward by Duke Energy, which it criticized in the report along with other “technology monopolies” such as TEPCO in Japan as “shunning the innovative potential of the IT sector in favor of polluting, centralized electricity generation like coal and nuclear power”.

Greenpeace also cited Google’s US$2.5m grant that supports intelligent energy policy reforms in the US, but did criticize the search giant for its lack of solutions that drive energy saving outside of the IT sector.

Cisco
Cisco received kudos for its new corporate energy targets and improved commitment for managing its energy footprint and increasing the amount of renewable energy powering its operations.

“Cisco earns top marks for its increased leadership in addressing its growing energy footprint, with an update to its greenhouse gas (GHG) and renewable energy targets, along with a performance-based commitment to direct its growth toward cleaner sources of electricity and away from coal,” Greenpeace said.

In Cisco’s case, it was criticized for focussing its green efforts in the UK instead of spreading these out across the US.

In Cisco’s Allen, Texas, data center it has put renewables to the test adding photovoltaic panels to its roof and installing an energy efficient cooling plant.

SoftBank
SoftBank, which Greenpeace ranked tenth, received a special mention this year for its strong leadership in clean energy policy following the incident at the Fukishima power plant following its devastating tsunami.

“While SoftBank has continued this advocacy at a lower volume and frequency in the past year, it has also stepped forward and backed up this advocacy with significant new investment in renewable energy projects in Japan.”

SoftBank created a new subsidiary SoftBank Energy which will see SoftBank install more than 200MW of renewable energy, 6.6MW of which is already being generated by solar PV.

Microsoft
Microsoft, which ranked 12th on the list, also received a special mention for bringing its scores up more than any other company – by 11 points. It showed its support for wind energy tax credits in the US and a commitment to carbon neutural operations.

“The IT sector’s progress will continue to be blocked by large, dirty electric utilities until more companies embrace their political power and advocate for climate-friendly decentralized energy policies,” Cook said.

In Japan, the US and India some companies are banding together for such change, but he said they also needed to become more involved in policy debate.

“North Carolina is a critical example, where AT&T, Cisco, Google, IBM and Wipro all operate and could work together to demand renewable energy from Duke Energy, or step in to defend state renewable energy policies currently under attack by fossil-fuel funded groups,” Greenpeace said.

You can see the full listing below