Google is sharing some of its optical network specifications, in an attempt to help spur adoption of SDN (software defined networking).

The networking sector has made progress embracing SDN over the last year, it is still not very far along at the optical layer, Google network architect Bikash Koley told a telco event in Chicago. To help fix this, the tech giant is sharing some of its optical topology configuration models for multi-vendor equipment, through a telco-oriented group called OpenConfig, and plans to do the same with its Open Line System configuration model in the next month or so, 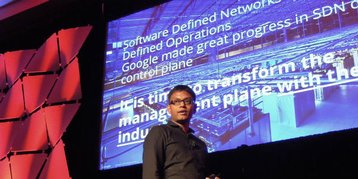 Openconfig began as an initial informal collaboration between Google and Microsoft, who were then joined by teleco players AT&T and BT. This collaboration produced a network data model for next-generation packet networks, starting with specifications for (border gateway protocol) BGP, which plays a vital role in routing traffic across IP networks.

OpenConfig members are working on a model for configuration and operational states to promote adoption of SDN throughout optical network topologies. “We’re in the middle of transforming our transport network to SDN principles,” Koley said. “To do that we need a vendor-neutral topology and configuration model and a centralized configuration that can be consumed by existing vendor element management systems for native support and translation to network elements. Most importantly, we need network-state visibility.”

Lightreading reports that Koley added: “It’s important to have configuration and network state models developed and deployed in tandem because changing configuration means making a global-level change on the network. You need to be able to see that change in real-time. If you can’t see that change you can have problems with your network. That’s why it doesn’t make sense anymore for configuration and network state models to be developed separately.”

Koley said at the same event OpenConfig is also looking for broader industry participation, and doesn’t want to only represent the voice of the huge firms that are already part of it. It’s not a standards group, and it’s open to any size network operator.

The group is using the open source repository GitHub for its work, but currently with an invitation-only group of participants. In future, however, the aim is to contribute to all work into the standards process.