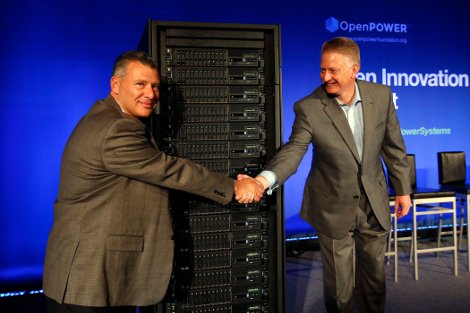 IBM and the OpenPower Foundation, a consortium it created last year together with Google and Nvidia, among others, announced the first batch of hardware and software products to come out of the attempt of a fresh take on the Power processor architecture and the scale-out server market.

IBM launched a line-up of servers powered by Power8 chips it open-sourced last year, and Taiwanese hardware manufacturer Tyan unveiled a development and reference design for a “white-box” server with a Power processor inside. Firmware and operating system for the box were built by IBM, Google and Canonical – one of the biggest developers of Linux-based software, including the popular Ubuntu OS distributions.

IBM said it will use the hardware design and the software stack as part of the infrastructure that supports its SoftLayer cloud infrastructure services “later this year.”

The foundation's chairman Gordon MacKean said, “The projects feeding the innovation pipeline to date will greatly enhance the performance of the next generation of servers by eliminating system-level bottlenecks.”

IBM debuted five Power System S-Class servers, all of them designed for large, scale-out deployments, and said they would be available in June. Two of the systems – S812L and S822L – run Linux exclusively, while the other three can run a combination of Linux, AIX and IBM I.

One- and two-socket, 2U or 4U configurations are available.

IBM started the OpenPower initiative together with Mellanox, Google, Nvidia and Tyan in August 2013, open-sourcing middleware, a Linux-based OS, a KVM hypervisor and an OpenStack distribution, all validated for Power.

The company had been providing developers with access to Power cores under a blanket license for several years prior to the launch of OpenPower.

In the scale-out IT market, Power is competing with Intel's x86 processors as well as its 64-bit Atom chips and Server-on-Chip (SoC) cards for servers. It is also competing against server processor and SoC manufacturers that license chip IP from UK's ARM Holdings.