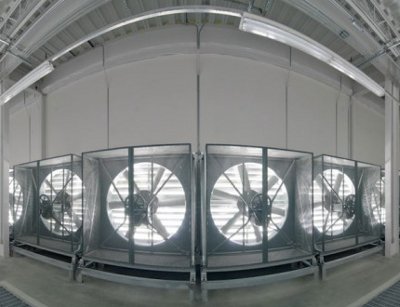 The WUE of Prineville’s Phase I in the second quarter was 0.22 liters per kWh. The result, in Facebook engineers’ opinion, was great, Lee wrote, while warning that there was really no good benchmark yet, as no other data center operator has publicly reported its WUE figures.

“We hope that other companies will soon start measuring and reporting WUE so we can begin setting benchmarks for the metric and working together to find new ways to improve,” he wrote.

The metric by definition requires an annualized calculation. Lee acknowledged this and said Facebook would release its WUE figures every quarter, turning it eventually into a 12-month trailing metric.

WUE measures efficiency of water use by the data center cooling only. It does not include water used in plumbing or offices.

The metric is fairly new. It came out of The Green Grid, a data center industry organization that looks at corporate sustainability from the IT angle.

At a high level, WUE is defined by dividing annual water usage by the amount of energy used by the IT equipment. The units of WUE are liters per kWh.

To be able to measure WUE after one year the facility has been operational, Facebook had to retrofit the building management system by adding water metering.

Facebook has a direct evaporative cooling system in Prineville. The system has no electricity-guzzling mechanical chillers and uses very little water.

The data center is getting 100% of its cooling capacity through outside-air economization and evaporative cooling.

Facebook released its WUE figures through its Open Compute Project, a non-profit organization that provides a platform for open-sourcing data center hardware and infrastructure-systems design.