Both facilities have been fully leased by “international institutional customers”

The first is located near the capital Reykjavik, the second in the town of Blönduós, on the southwestern coast of the island.

The move follows a significant capital investment from SBI Crypto Investment, a subsidiary of Japanese online financial services provider SBI Holdings, announced in May 2018. The exact amount wasn’t disclosed, but SBI took a 41 percent stake in the company.

Etix says that, due to demand by international institutional customers, both campuses are already fully leased. 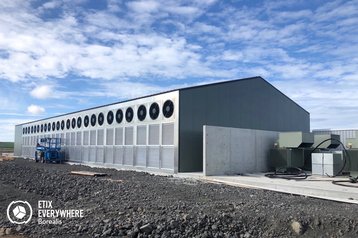 Etix was established in Luxembourg in 2012. Today, the company runs data centers in Luxembourg, France, Belgium, Scotland, Morocco and Colombia.

In the past few months, Etix has been expanding rapidly into blockchain services and cryptocurrency operations.

As part of its new strategy, Etix acquired a majority stake (55%) in Borealis Data Center, an Icelandic company specializing in HPC and blockchain services established in 2014. Borealis runs a crypto mine in Reykjanes, which DCD profiled in 2015, calling it “the ultimate shoestring facility.” As part of the deal, the company will be renamed Etix Everywhere Borealis.

Meanwhile, Etix Blockchain will manage the new facilities in Reykjavik and Blönduós, benefitting from the experience of the Borealis team. Both sites are already open and expanding, with additional capacity available before the end of the year. Once complete, the two campuses will offer total hosting capacity of about 30,000 servers.

“Mining is only the first step of the blockchain revolution, many other industries will soon embrace this technology,” commented Antoine Gaury, head of Etix Blockchain.

“The segmentation between premium Data Centers (Tier III and IV standards) and low-cost mining farms will fade, in favor of intermediary standards offering competitive financial solutions in line with the quality requirements of institutional customers.”

Etix Blockchain is currently looking for new data center sites in Iceland and the Nordics.

Borealis was recently in the news as one of the victims of the“Big Bitcoin Heist” that saw a series of burglaries at cryptocurrency-mining data centers across Iceland – the biggest crime spree the country has ever seen. The main suspect, Sindri Thor Stefansson, escaped the low security prison and fled Iceland, but was later apprehended in Amsterdam.