Balancing the grid could be better with solid lithium batteries

Fluence Energy has signed an agreement to develop ways to use solid-state lithium batteries from QuantumScape.

The deal will be the first time QuantumScape's solid-state batteries have been used in stationary applications instead of in cars. Fluence, a joint venture between Siemens and energy giant AES, builds large battery storage systems on the grid to improve reliability and help match energy output from sustainable sources to the cycles of demand. 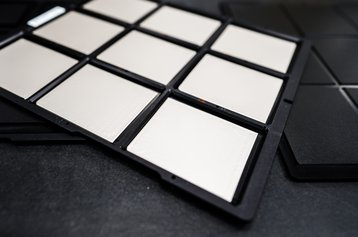 Renewable energy sources like solar and wind power are rapidly growing, but are only produced intermittently, with solar energy available during the day and wind power when ever the weather allows. This means there will be a huge need for large amounts of stationary storage, to hold energy until it is needed by consumers: stationary energy storage installations are predicted to grow more than 2,000 percent between 2020 and 2030.

Fluence packages batteries into 500kW cubic modules and delivers systems which can be installed at solar farms or grid nodes to store and deliver excess energy, or else at end user sites such as data centers, to regulate demand. Fluence units have replaced natural gas systems used to meet peak demand.

The QuantumScape battery swaps the polymer used in conventional lithium-ion batteries with a solid-state separator, and this allows a lithium metal anode, instead of the carbon or silicon anodes used in today's lithium-ion batteries. This can be more energy dense, with greater energy stored in a given volume. Thanks to its energy density, it's been normally proposed for mobile systems such as electric vehicles.

The Fluence deal is the first time this technology has been put into stationary systems: Fluence says the higher energy density will improve its grid-balancing systems.

“Fluence and QuantumScape share the same mission to reduce global greenhouse gas emissions through innovation and adoption of energy storage technologies, so our collaboration is a natural fit,” said Jagdeep Singh, co-founder and CEO of QuantumScape. “While we have historically focused on automotive applications, we believe our battery technology is broadly applicable and can play a role in other sectors contributing to a lower-carbon future.”

“We are delighted to work with QuantumScape to bring the benefits of solid-state lithium-metal batteries to the stationary storage space,” said Manuel Perez Dubuc, CEO of Fluence. “As the team that invented battery-based energy storage on electric grids, it's no surprise that Fluence is working with QuantumScape, the clear leader in the solid-state battery space, to bring its innovation to the power grid.”

QuantumScape's batteries are still in pre-pilot production: the two companies will work to validate and test them for use in Fluence stationary storage products such as GridStack, SunStack for solar farms, and EdgeStack for end user sites. The companies expect to enter into a large-scale supply agreement.