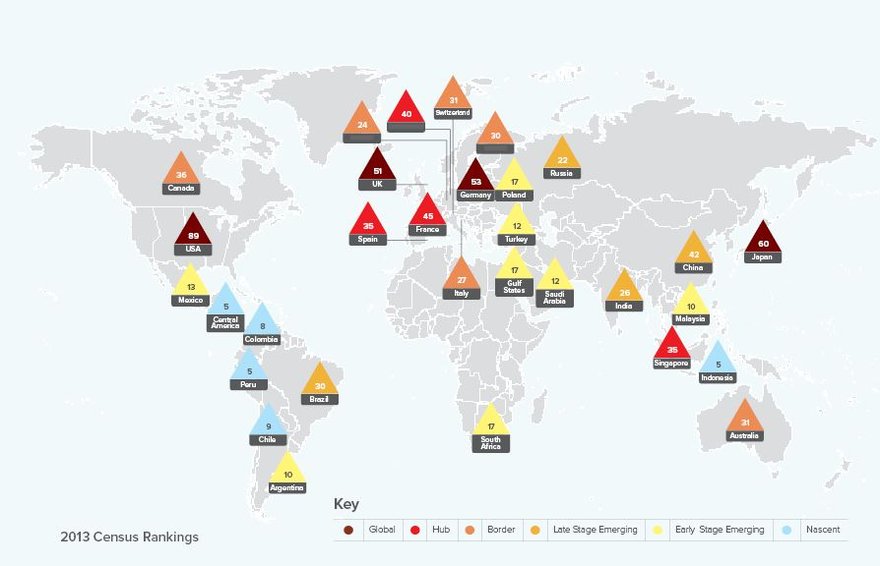 The Data Center Development Index [DCDi] used for the DCD Intelligence Global Industry Census is a measure first calculated from the data of our 2011 Census. It segments all markets participating in the survey and ranks them in terms of the state of evolution of their data center sectors.

The metric is aggregated from information about the market’s data center sector – its size, investment activity, technological deployments, supply sector, export performance and global influence. It also looks at external factors that impact upon the direction of the data center industry including economic, political, social, technological, legislative and resource availability factors. This creates an index in the manner of The World Economic Forum’s Networked Readiness Index and The Economist’s ‘Big Mac’ Index.

Like other index figures, the DCDi is a computed and relative figure rather than an absolute one. The DCDi figures do not in themselves denote size, efficiency, monetary value or any other metric.

The key value of the DCDi is that it can segment the evolution of national data centers and therefore act as a roadmap for the future direction of data center markets in terms of demand, the source of that demand, the challenges that come with further evolution and the solutions that may be deployed in order to meet demand.

While every market is different, and although the data center industry changes quickly, there is a market logic to the evolution of these markets since data centers are ultimately constructed and operated for quantifiable purposes.

In 2011 and 2012 a linear representation was used for the DCD Index. This representation moves from higher ratings in North America and Western Europe through the major emerging economies to the ‘nascent’ markets in Latin America and South East Asia. The hub city of Singapore breaks this pattern. And China and Brazil had, by 2011, reached a more evolved status than India or Russia.

In 2013 new markets were added to the DCDi model. These included Japan, Indonesia, Malaysia, Peru and Chile. And we have since seen certain markets mature and grow rapidly, especially China, Brazil, India and Russia. Meanwhile, Turkey, Malaysia and Argentina have evolved from nascent markets into ‘early stage emerging’ markets on the basis of wider IT growth and demand for data center services, and because of the emergence of local data center supply industries.

There is also some evidence that economic recession in the Euro-zone economies had a braking effect in Southern and Western Europe. Despite this, the over-riding drivers of IT growth, technological progress and demand for data centers more than counterbalance the negative impact of sustained economic slowdown.

To some extent, the key trends of the 2013 DCDi are to be expected. They include the maturing of the late emerging – BRIC – markets. This is not only due to the growing size and economic importance of the sector within their respective markets. It also represents a rapid increase in sector maturity, which is partly fostered by growing resource awareness.

The speed of this growth is a testament to the greater capability of learning between international markets.

At the same time, the slight decline in the ratings of the four global markets (Germany, Japan, the UK and the US) reflects the increased development of key emerging markets, which continue to evolve their local skills, expertise and capabilities, at least at to the level of established European markets.