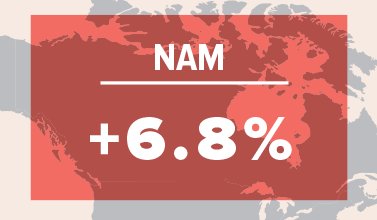 2012 saw an increased focus on the data center industry from the media, public and government bodies, all concerned about its use of energy. With a 19% increase in the amount of electricity consumed globally by data centers between 2011 and 2012, there were fears that the rising need for power would continue unabated.

But results from the 2013 annual DCD Intelligence (DCDi) Industry Census show that this trend is slowing. The rise in power for the year was under half of 2012’s figures, at just over 7%.

Increased implementation of energy efficiency measures, consolidation projects in the mature markets of the US and Europe, increased usage of outsourcing and a slight slowdown in several emerging data center economies have all contributed to a lower rate of growth in the amount of power consumed by mission critical facilities.

At a regional and individual country level the picture is not so clear cut. Several of the emerging data center economies witnessed substantial power growth during 2013 including MEA (17.5%) and Latin America (15.1%).

In those markets where the data center industry has been active the longest, however, efficiency measures appear to be making their mark.

North America
In the North American markets of the US and Canada, data center owners and operators have faced increasing costs and in certain states the threat of energy consumption-related taxation.

The 6.8% power increase across the industry this year is less than previously predicted and means that the forecast through 2016 has been reduced by about 1,000MW: from 14,330MW down to 13,250MW.


Latin America
Latin America is one of the regions where data center power increase is still in double digits. This is partly due to the fact that many of the countries within the region are emerging data center markets, which means they are witnessing rapid growth in space and rack numbers. Their rise in power use is also an indication of a market where existing facilities continue to be operated less efficiently.

Asia Pacific
The Asia Pacific region contains a mix of emerged and emerging data center economies. Emerged data center markets, such as Hong Kong and Australasia, have witnessed a slight decrease in data center power requirements over the past 12 months. This is in contrast to the emerging markets of Malaysia, Indonesia and China, all of which continue to show increases above the global average.

Europe
Europe is a mixed market with an obvious split between the developed markets of northern Europe and the emerging Central and Eastern data center economies. The established markets of Northern Europe have seen a marked shift from the increases in power usage from last year and, as with the US, this is indicative of increasing use of energy efficiency measures and consolidation projects. However, in countries where there has been significant build activity over the past 12 months – especially in less developed markets – there have been huge increases in power use over 2012 levels. Examples are Poland (30%), Turkey (30%) and Russia (17%).

MEA
The only Middle Eastern and African market with a significant shift in power use is the Gulf where the percentage increase in power has fallen to below 4%. In all other Middle Eastern and African markets, power usage of the data center industry continues to rise at double-digit rates. Again, this highlights the discrepancy between the more established markets and those where the data center industry is less well developed.

Increase in power by region (MW)

This article first appeared in Focus 33. The diagrams have disappeared in a website update but they are included in the  digital edition here.   (updated link)