Not only could you lose your home, you could also lose your Internet connection

In a study analyzing the effects of climate change on Internet infrastructure in the United States, University of Wisconsin-Madison and University of Oregon researchers found that a significant amount of digital infrastructure will be impacted over the coming years, and cautioned that mitigation planning should begin immediately.

“This is a wake-up call” 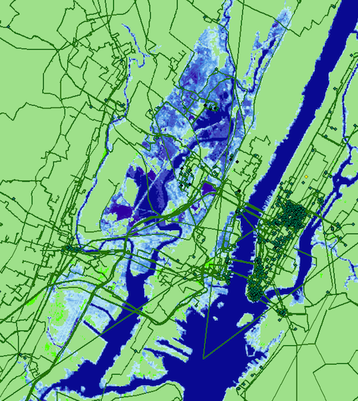 The peer-reviewed study Lights Out: Climate Change Risk to Internet Infrastructure, authored by Ramakrishnan Durairajan, Carol Barford and Paul Barford, combined data from the Internet Atlas - a global map of the Internet’s physical components - and projections of sea level changes from the National Oceanic and Atmospheric Administration (NOAA).

“Our analysis is conservative since it does not consider the threat of severe storms that would cause temporary sea level incursions beyond the predicted average,” Durairajan et al. note.

At a particular risk are fiber optic cables buried underground, which - unlike submarine cables - are not designed for prolonged periods of submersion.

According to the study, in 15 years some 1,186 miles (1,908km) of long-haul fiber and 2,429 miles (3,909km) of metro fiber will be underwater, while 1,101 termination points will be surrounded by the sea. “Given the fact that most fiber conduit is underground, we expect the effects of sea level rise could be felt well before the 15 year horizon,” the paper states.

The US networks most at risk belong to AT&T, CenturyLink, and Inteliquent, with a particularly strong impact expected across New York, Miami, and Seattle metropolitan areas. “Given the large number of nodes and miles of fiber conduit that are at risk, the key takeaway is that developing mitigation strategies should begin soon.”

Researchers added: “Future deployments of Internet infrastructure (including colocation and data centers, conduits, cell towers, etc.) will need to consider the impact of of climate change.”

In a separate statement, Paul Barford said: “Most of the damage that’s going to be done in the next 100 years will be done sooner than later. That surprised us. The expectation was that we’d have 50 years to plan for it. We don’t have 50 years.

“This is a wake-up call. We need to be thinking about how to address this issue.”

Whether any immediate action will be taken remains unclear, with the US federal government disputing climate change science and rolling back the associated regulations. “The first instinct will be to harden the infrastructure,” Barford said.

“But keeping the sea at bay is hard. We can probably buy a little time, but in the long run it’s just not going to be effective.”