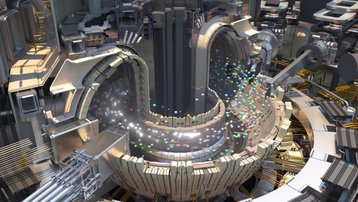 “We’re looking forward to delivering a supercomputer for QST that will further the Institute’s work in discovering opportunities for fusion power as a reliable energy source,” Mamoru Nakano, president of Cray Japan, said.

“The speed and integrated software environment of the Cray XC50 will enhance QST’s infrastructure and allow researchers to speed time to discovery.”

The system replaces Helios, a 1.237 petaflop Atos/Bull system that was decommissioned in 2017. Japanese researchers have been temporarily using Italy’s Lenovo NeXtScale supercomputer Marconi, which is rated for more than 15 petaflops.

The Cray XC50 will be used by more than 1,000 European and Japanese fusion researchers, and will compliment the ITER project, a 35-nation initiative to build the world’s largest tokamak - a magnetic fusion device that could prove the feasibility of a large-scale, net energy-producing thermonuclear fusion reactor.

ITER is the world’s largest fusion experiment, being built in Saint-Paul-lès-Durance, southern France. It is designed to produce around 500MW of fusion power, sustained for up to 1,000 seconds, while 50 megawatts of thermal power is injected.

But huge challenges remain, with ITER components often delayed and over budget. Assembly is expected to be completed in 2021, first plasma achieved in 2025 and the start of the deuterium-tritium operation is planned for 2035.