Links ANZ to the US

The 14,000 km transpacific submarine cable system Hawaiki is now under construction, ahead of a planned launch in mid-2018.

The Amazon-backed cable will link Australia and New Zealand to mainland US and Hawaii, with options to expand to several South Pacific islands. 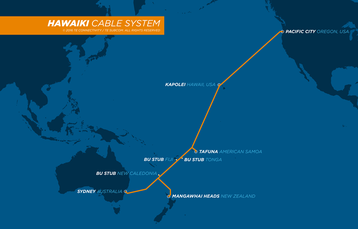 An early, but important step

“We’ve seen tremendous progress with Hawaiki in the past several months, with each step bringing us closer to a completed, working system,” Remi Galasso, Hawaiki CEO, said.

“We remain on time and on budget, and trust that in conjunction with TE SubCom, Hawaiki will be fully lit by mid-2018, bringing competition and diversity to the market, and vital connectivity to the region.”

Aaron Stucki, president of TE SubCom, added: “The manufacturing stage of Hawaiki is moving forward precisely as planned and overall progress is only going to gain momentum from here.”

“With manufacturing of cable and repeaters underway, we are right where we should be on our deployment timeline.”

The cable is being built at TE SubCom’s facility in Newington, New Hampshire. More than 1,000 km have already been constructed, while the marine route survey is still ongoing.

In addition to Amazon, the cable has funding from Vodafone, REANNZ, and the American Samoa Telecoms Authority. It will be the highest cross-sectional capacity link between the US and Australia and New Zealand, and comes at a time of major investment in submarine cables.