Cloud&Heat, the German cloud provider which also offers heating, is moving into a two-story data center in a Frankfurt skyscraper formerly occupied by the European Central Bank (ECB). Other tenants of the building will benefit from the facility’s waste heat, and total savings could reach €70,000 ($79,900) per year.

Cloud&Heat will host up to 84 server racks in a 640 sq m (6,900 sq ft) space on two floors of the Eurotheum building, on Neue Mainzer Straße in Frankfurt. The space was previously an ECB data center, when the bank occupied the building up till 2015. Now, the Eurotheum building contains offices, apartments and hotel space, which will be able to use the waste heat from the Cloud&Heat facility when the facility opens in Autumn this year. 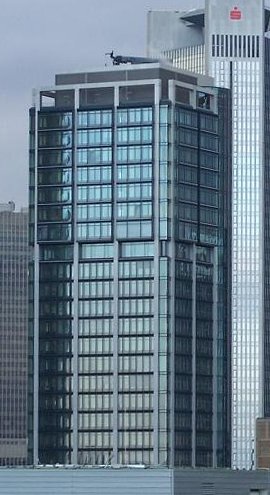 Cloud&Heat offers a conventional infrastructure as a service (IaaS) cloud service based on OpenStack, or a private cloud service on its physical servers, which it manages and operates on behalf of customers. A direct water cooling system captures the waste heat of the servers for reuse. The company offers free heat to so-called ”heat customers,” in exchange for housing a web-connected server enclosure in their buildings.

In 2016, Cloud&Heat reported that a data center it operated in the basement of a Dresden building was running at a PUE of 1.05, while almost all its waste heat was being used to heat flats above - making it ”the most energy-efficient data center in the world.” Other facilities are operating in Hamm and Münster.

Cloud&Heat is now moving into a more high-profile location, where it will form part of an ambitious climate protection plan, under which the city of Frankfurt am Main has committed to cut its energy demands by 50 percent before 2050, and reduce its greenhouse gas emissions by 95 percent compared to 1990 levels,

Wiebke Fiebig, head of the Frankfurt Energy Agency welcomed the arrival of Cloud&Heat in the Eurotheum, pointing out that data centers would benefit the city if their energy demands could be kept in check: ”Energy-efficient concepts such as the one of Cloud&Heat support the city of Frankfurt am Main,” he said.

The Eurotheum installation will provide up to 600kW of heat when the two floors are fully occupied. This will be carried away by a direct liquid cooling system, and fed directly into the building’s heating system, which is used by offices, conference rooms, restaurants and a hotel in the building.

The installation will save up to €40,000 ($45,634) of heating energy per year, Cloud&Heat says, which is equivalent to around 150 low-energy homes. The liquid cooling will also save around €30,000 ($34,225) per year compared with conventional cooling in the data center, the company says.

If all goes well, the data center space could be extended with more server racks on the ground floor.

“With the Eurotheum, we are expanding our cloud infrastructure by a strategically important location,” says Nicolas Röhrs, CEO of Cloud&Heat. “We only install servers of the latest generation and thus meet even the most stringent data, process and failure security requirements.”

The news crowns a recent series of announcements of distributed heating deployments, including a swimming pool heated by a data center run by Stimergy in France, and a crowdfunding exercise by Nerdalize in the Netherlands, which will result in homes in Delft getting heat from servers offering distributed computing.