A controversial data center proposed for Middletown, Delaware has been awarded a public grant but the firm behind the scheme still has to gain environmental proposal for a large co-located natural gas energy plant, as well as revealing more about its backers.

The Delaware Economic Development Office’s Infrastructure Investment Committee has given the go ahead for Cirrus Delaware LLC’s proposal to build a 40MW data center co-located with a 52.5MW power plant, and awarded the firm a $7.5 million public grant towards the $350 million cost of the project. But before the money is released and ground can be broken, Cirrus must gain approval from the Delaware Department of Natural Resources and Environmental Control (DNREC), and must also provide information about its backers and who will eventually operate the facility. 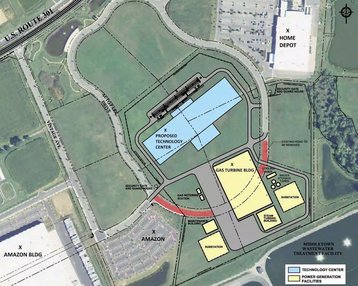 Despite the local council’s approval for the 21,000 sq m (228,000 sq ft) complex, there is vociferous opposition from local people who believe the natural gas plant’s emissions will be unhealthy, produce too much carbon dioxide, and undermine property values. Cirrus argues that the project would immediately create 750 construction jobs and, after three years, would provide 117 jobs.

DNREC is currently reviewing the proposal for the 52.5MWt natural gas generator which, Cirrus said, is necessary as a backup power supply in case the electrical grid goes down.

According to Delaware Online news journal, Senator Dave Sokola, a committee member who voted in favor of the grant, said, “It’s reasonable to have heartburn about something when there appears to be a little bit of secrecy. I think the public has a right to know.”

In response, Dennis Silicato, a partner at Cirrus Delaware, told the publication that the grant is a sound investment because, even if the company failed, the $6.5 million in electrical power line and substation upgrades and $1 million in fiber-optic cables that lead to the facility would remain in place.

On the subject of naming possible investors, he said, “At this point the people that we’re dealing with do not wish us to divulge [information]. They’re major corporations.”