The system consists of 20V diesel-fired series 4000 MTU engines, each with an electrical output of 2,000 kW. 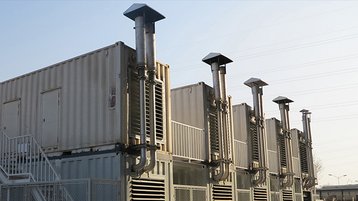 Gensets on the roof of the data center – Rolls-Royce

Earlier this month, cloud giant AWS announced that Sinnet would be buying its assets in China for 2 billion yuan ($301.2m). The transaction was arranged in order for AWS to comply with national security laws that prevent non-Chinese companies from owning certain critical infrastructure assets – enabling it to continue providing cloud services in the country.

Sinnet’s latest data center in eastern Beijing is expected to open before the end of the year. The gensets for the facility were delivered in August and commissioned in October. They were installed on the roof by power integration company Tianjin Pauway Power Equipment Co. and supplied with diesel stored in eight underground tanks.

“For us, the high availability and reliability are the most decisive factors for choosing MTU engines, said Hao Liu, president at Pauway.

“Our customers depend on us ensuring that the data flow is maintained at all times – even a power outage must not lead to any disruption or impairment of our service whatsoever.”