Avere Cloud-Core NAS (C2N) is a system that combines the existing all-flash MX100 management nodes – essentially large chunks of storage cache - with new disk-based CX200 storage nodes, turning the Edge Filer into a storage appliance with up to 5PB of capacity.

This combination is especially suitable for businesses that take their first steps with public cloud infrastructure and want to improve performance of their cloud-based storage, while still maintaining some data assets on-premises. 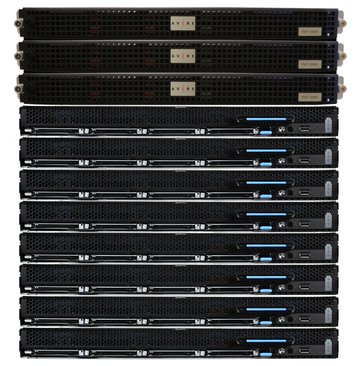 Avere is a company built around a single product, the FXT Edge Filer. This all-flash appliance acts as a massive cache for a customer’s networked storage pool – it intelligently moves data around to ensure that up to 98 percent of your read/write requests are served from flash, even if the rest of your infrastructure is entirely disk-based.

“We’ve created our own file system that runs all in flash and all the updates, all the writes, all the metadata, all the directory updates, file updates – all happens in flash, including the read cache. But the big bulk depository could be the disk system behind us,” Ron Bianchini, president and CEO of Avere, told DatacenterDynamics.

Initially, the Edge Filer was designed to work alongside third-party storage servers and cloud storage services. This week, Avere has launched its own disk nodes.

The CX200 is a 1U extension shelf full of HDDs that compliments the functionality of the Edge Filer, adding 120TB to the raw capacity of the C2N system. It supports object storage – the preferred method of storing data online – and a single system can scale up to 5PB.

According to Avere, enterprises looking to adopt cloud technologies are often faced with challenges such as unfamiliar object-based APIs, vendor solutions that start at over a petabyte and do-it-yourself solutions that are complex to implement. C2N was designed as the first step to cloud migration, integrating object storage in the cloud with an organization’s existing NAS infrastructure.

“If we look at what customers are trying to do, they typically have traditional NAS and they are trying to figure out how to get that to the public cloud - but a lot of them want to take an intermediate step,” Bianchini said.

“And that’s really what the intent of this is. The intent is to provide our FXT in the front, give customers capacity that they have locally, they can then migrate into that, and as they get comfortable, they can migrate from there to the public cloud.

“When we talk to customers, we always talk about how you could take baby steps into the cloud. But I think the thing that customers like the most about us is: if they ever get to the point that they are unhappy, they can take baby steps back out. So it’s really the ability to migrate in and out of the cloud, based on what you need.”

Avere C2N system is available immediately in North America and in 90 days across the rest of the world.