No mention of PUE, allowances made for different climate zones

The American Society of Heating, Refrigerating and Air-Conditioning Engineers (ASHRAE) has published a new standard that establishes the minimum energy efficiency requirements for data centers.

The Standard 90.4-2016, also known as the Energy Standard for Data Centers, has been in the works for several years. It includes recommendations on design, construction, operation and maintenance of data centers, as well as on the use of on-site and off-site renewable energy.

The standard caused controversy last year, when ASHRAE revealed that the draft version included provisions for maximum permissible PUE levels. Following much debate, all references to PUE have been removed from the final version.

“We worked very hard to craft this standard in a manner that does not stifle innovation in the data center industry while simultaneously offering criteria to help ensure energy savings,” Ron Jarnagin, chair of the 90.4 committee, said. “It is important to keep in mind that data centers are mission critical facilities where risk management is the primary concern.” 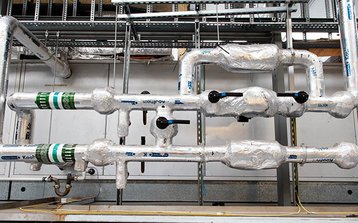 Standard 90.4 is a performance-based design standard that offers the design components for mechanical load (MLC) and electrical loss (ELC). Calculations of the MLC and ELC are made and then compared to the maximum allowable values, which vary across different climate zones.

Compliance with Standard 90.4 is achieved when the calculated values do not exceed the values contained in the standard. An alternative compliance path is provided that allows tradeoffs between the MLC and ELC.

For ease of use, the standard also includes a sample compliance checklist, diagrams to illustrate compliance and sample calculations.

“The committee initially pursued a Green Grid power use effectiveness-like (PUE) process for setting the criteria in the standard but the Green Grid’s PUE metric is actually based on measured energy use data rather than design criteria calculations,” Jarnagin said.

“We realized that the design calculations contained in Standard 90.4 would not likely match up with the actual energy use data so this approach was amended. We feel that we’ve recommended the requirements for 90.4 based on a justifiable 80/20 rule where only the lower performing systems will be affected.”

Following the release of the new standard, data centers will no longer be subject to the ASHRAE Standard 90.1, Energy Standard for Buildings Except Low-Rise Residential Buildings.

According to Jarnagin, Standard 90.4 is expected to be updated on a continued basis in order to keep pace with the rapidly changing technologies in the industry.