Canadian architect WZMH has proposed a system of concrete blocks to recover energy wasted when data center generators are tested.

Data center generators are for backup, but they are fired up every month to test them, producing energy which the WZMH says normally goes to waste. A research project by WZMH and Toronto's Ryerson University has designed a system that would use that energy to raise concrete blocks in an elevator, storing potential energy which could then be stored in batteries or used as a green energy source for nearby buildings.

The concept has not yet been tested, but WZMH says it has a good chance of becoming a viable product for data centers and hospitals which regularly test backup generators. The research project also looked at the potential for waste heat recovery, concluding that integrating data centers with other buildings could generate enough waste heat to eliminate the need for natural gas for space heating. 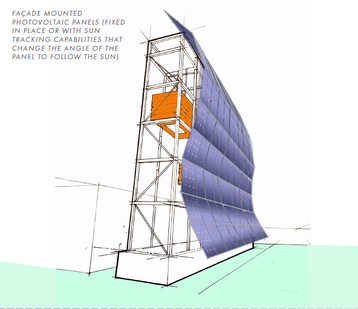 "This is a concept. It's part of a research and development project we are working on," said WZMH principal Zenon Radewych in an email to DCD. "We believe it has a strong chance of being a product."

Although WZMH and Ryerson's GENeBLOK idea has not been built, several projects around the world have tested the idea of using winches and mine-shafts as gravity-based batteries: "It is not 'high tech' at all. It's basic science/physics," said Radewych. Standard elevators already use the technology, says WZMH's GENeBLOK brochure: "Elevator manufacturers (i.e. Otis) produce vertical lifting devices that generate electricity as the elevators descend. When an elevator cab goes up with few people inside and then down with many people, the system generates more power than it uses."

The brochure explains: "Once per month millions of generators are tested at mission critical and healthcare complexes worldwide – and today more than ever, these building types are being constructed at a pace that will see the amount of the facilities more than double in the next 10 years. The generators are fueled by diesel or natural gas and in almost all cases the energy created by testing ‘goes to waste.’"

WZMH proposes that a tall structure be built close to the data center or hospital. When the generators are tested, the electricity generated would run motors which raise concrete weights. As the weights descend, the motors generate electricity, which can be stored in a nearby battery plant, and used as a green energy source for nearby buildings.

To supplement the energy stored in the blocks, WXMH suggests that the tower should be coated with solar panels, which can be made fixed, or else adjust their angle to track the sun. 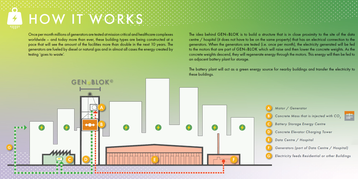 What about the concrete?

One obvious question about the proposal is, why don't data centers simply use the energy produced in genset tests, feeding it into their microgrids, and using it to top up batteries or for other purposes?

"Data center and hospital operators want to limit all potential sources of disruption to their systems. This is why many operators do not utilize their generators for grid sharing. Operators of these facilities seek solutions to ensure their systems are as much as possible de-coupled from the grid," says the WZMH brochure. "The GENeBLOK solution essentially decouples the data center / hospital generators from any connections beyond the tower of concrete block."

WZMH also suggests that the tower system could be studied as a potential adjunct to the data center UPS system, providing storage alongside the batteries or flywheels traditionally used, and reducing the size of UPS needed. 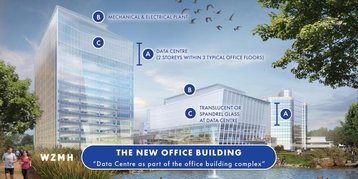 The environmental impact of the concrete blocks is also flagged up - WZMH proposes that some of the carbon produced in creating the block could be offset by making them with CarbonCure's concrete, which sequesters some CO2 in the blocks themselves.

And the tower could generate its own power: "The GENeBLOK with its length and height is ideal for the installation of photovoltaic (solar) panels that can also be used to lift the concrete blocks when there is excess energy created from the sun that cannot be stored in the battery plant. The blocks can descend in the evenings when green energy is not possible from the sun."

WZMH estimates that a data center that has eight 3MW diesel generators, and tests them for one hour each month, can supply enough energy for one day's free energy a week in a 125-apartment building. 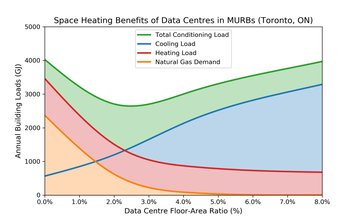 "We've been conducting some energy modeling of multi-unit residential buildings with co-located data centers on the upper floors (using DOE's EnergyPlus software), said Jeremy Lytle, a graduate student at Ryerson University who worked on the WZMH project. "In our models, the data center cooling system is connected to the rest of the building's heating via an ambient distribution loop, so that the waste heat can be recirculated."