Aligned Data Centers, which already offers power and cooling on demand at its data centers, is now promising to increase the level of green energy at its sites, using a device which generates electricity from waste heat.

The company has a deal to use a heat recovery system made by a Swedish firm, Climeon, which claims to have improved the efficiency of the heat recovery process using a combination of physical and chemical processes. The system changes the economics of heat recovery, and could allow data centers to be entirely powered using power generated from the waste heat produced by industrial sites, or else from geothermal energy, according to Jakob Carnemark, the CEO of Aligned. 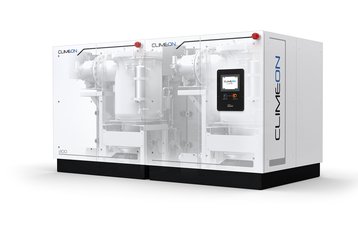 The Climeon Ocean box is available in various sizes, and large installations can be built up in a modular fashion to provide up to 50MW (below). A four square meter unit provides 150kW of power when supplied with a cold water source, a hot water source and a power connection, according to Climeon,

Such heat engines are a well established technology, but normally require “high grade” heat, with a large temperature difference between their inputs. Normally, the hot source has to be at 200ºC (140ºF), but the Climeon Ocean only needs low grade heat, with the hot input running at around 70ºC. 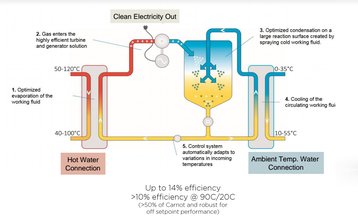 Climeon is not claiming to have broken any physical laws, but it says it has doubled the efficiency of the best steam turbine heat engines using the Rankine cycle, and has a patent for its technology (US Patent 20130038055.

Heat engines generate energy by taking a substance through a cycle of pressure and volume, and get maximum efficiency if they can approach the ideal properties of a gas. Climeon’s machine uses a chemical process to absorb the working gas at one part of the cycle, and release it at another, which augments the physical expansion and compression of the system. This improvement is what allows the system to exploit lower grade heat, Climeon says.

”In most cases if you want to use clean electricity, converting solar and wind power are the typical methods; however, the sun doesn’t always shine and the wind doesn’t always blow,” said Carnemark. ”By cultivating this largely untapped resource in waste heat and converting it to 100 percent stable green baseload power, and by being able to use low temperature geothermal sources, we can support the data center industry’s rising demand for green energy in ways not previously possible through this new, highly sustainable and reliable approach.”

Aligned Data Centers, a subsidiary of Aligned Energy, has opened a 30MW data center in Plano, Dallas, which offers pay-as-you-go power and cooling, with a guaranteed power usage effectiveness (PUE) of 1.15, and a lower water usage than comparable sites. The site uses cooling technology from an Aligned Energy subsidiary, Inertech.

Aligned is also building a data center in Phoenix Arizona, due to open in 2017.