“There is no significant way to improve the design,” say contractors on the project

A Tier III certificate from the Uptime Institute proves that the data center was designed and built in compliance with strict reliability guidelines, and all mission-critical equipment is concurrently maintainable.

“Receiving third party validation and using recognized national standards is critical for us and our mission because our industry must establish greater transparency on levels of reliability backed by data,” said Jakob Carnemark, founder and CEO of Aligned Data Centers.

The facility in Plano is notable for pioneering a ‘pay-for-use’ model for colocation, where customers only pay for the power they actually use rather than contracting for a set amount. 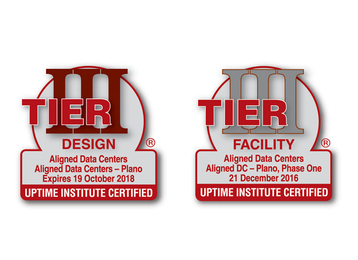 The data center in Plano was opened in November 2015, offering 100,000 square feet of data center space with support for power densities of up to 50kW per rack. It guarantees contractual PUE of 1.15, and has now obtained a set of Tier III certificates.

Tier III certification consists of two stages: the first checks whether the design of the facility meets the defined availability requirements of the selected Tier. The second is more important: it includes live testing of the mechanical and electrical performance of the facility under real-world conditions, simulating events such as a complete power outage.

“This is the first instance that I am aware of where the client has deliberately planned and employed Tier standards with reliability-centered engineering methods to assure clients of reliability, and the phase build approach minimizes capital expense without compromising reliability,” said Lee Kirby, president at Uptime Institute.

“This use case is one more example of how the adoption of global standards propels innovation and reliability to new levels.”

In addition to Tier certification, Aligned had also arranged a reliability analysis of the electrical and cooling systems by consulting engineering firm MTechnology. According to the results, the facility in Plano can ensure availability of six 9’s (99.9999%), with a Mean Time Between Failures (MTBF) of 400 years.

“Most data centers achieve an MTBF between five and 50 years,” said Stephen Fairfax, president of MTechnology. “Aligned Data Centers has achieved one of the highest combined cooling and electrical reliabilities we have analyzed in our 20 years. This reliability is so high and the probability of failure so low that there is no significant way to improve the design.”