2bm specializes in built to order data centers, and recently nailed its environmental colors to the mast by achieving certification under CEEDA (Certified Energy-Efficient Datacenter Award) - the fourth to certify in EMEA. 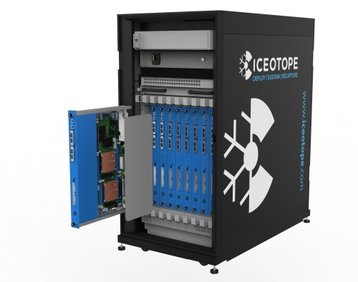 Based on the principle of liquid immersion, the Iceotope system covers the electronics on the processor blade with a casing full of a dielectric (non-conductive) coolant liquid, Solvay Galden. This creates a a self-contained environment, where heat is extracted by the coolant, and transmitted to water channels that connect to a cooling plate. The water is circulated through the rack, and can be collected and re-used for other purposes, like central heating.

Iceotope says Solvay Galden extracts heat much faster than water, and orders of magnitude faster than air. 2bm says that data centers equipped with this fan-less technology, will save up to 40 percent of the total cost of data center ownership.

Iceotope founder and technology director Peter Hopton stated that “the need for flexibility and scalability is critical to operate in a today’s digital economy - and we believe that liquid cooling is the only way to do it.”

Data center building companies have long been reluctant to adapt their IT equipment to liquid cooling, fearing the trend would not catch on; but now, liquid cooling brings new prospects for data centers, driving the possibility of edge computing technologies and modular data centers, in addition to efficiently built data centers.

In an opinion piece published in DCD earlier this month, Sorell Engineering Founder Vali stated that “liquid-cooling at the processor level is the wave of the future, and it will transform the data center industry in the next 5 years.”

A previous version of the story incorrectly identified the coolant as 3M Novec, not Solvay Galden.