Is your data center driving with the brakes on? 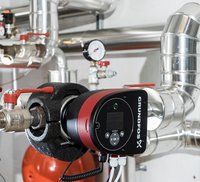 Globally, over 18 million servers are working flat out, 24/7, in thousands of data centres. In addition to a power supply and internet connection, cooling is one of three essential features of their life support system. The world’s online ecosystem relies on thousands of racks of devices and components that have to be kept at the correct operating temperature. The problem is, in what we could consider a smart attempt at dispersing heat, we may actually be slowing down cooling efficiency.

Chilled water systems are the default in most data centers, just as in many commercial buildings where heat dispersal is mission-critical. Typically, these systems are centred on a fairly large pumping station. This pressurizes cold water, then forces it out throughout the building, via a complex system of balancing control valves, positioned at each computer room air-handler (CRAH). In principle, heat is absorbed by the chilled water which is then vented into the outside air.

This methodology seems to make sense, otherwise it would not have been adopted so widely. However, if we applied the same principle to another form of technology, say a car, it may be considered counterproductive. Imagine, you are flying down the highway at full speed, however you need to quickly slow down to enter a car park - rather than reducing your acceleration you simply slam the brake at the same time. This is exactly what a balancing control valve, otherwise known as a PICV, is fighting to do to quell the force of the main pumping station.

In a car this would lead to glowing red brake discs, poor stopping distance and higher than anticipated fuel consumption. Similarly, in a data centre, you’d be wasting energy by working against the very system that’s trying to save it. Having parked the car - and the analogy - for the moment, let’s take a look at the Grundfos solution to this predicament.

It’s called Distributed Pumping. It’s a kind of democracy for chilled water distribution, where the power to make a difference is dispersed to places where it matters most. The star of the Distributed Pumping ecosystem is the Grundfos MAGNA3.

The benefits of the MAGNA3

MAGNA3 can cut the accumulated energy required to pump chilled water around a data centre by up to 54%. Which makes Moore’s Law seem like a law about a slight technological change now and then. In what may eventually be called a ‘legacy ’cooling system, PICVs are a response mechanism. They are on the receiving end of what the main pump dictates. But when you replace these valves with MAGNA3, you are actually fitting intelligent components that independently modify their own performance by communicating with and responding to temperature sensors mounted in the CRAHs. So, maintaining a consistent temperature is something that is executed out on the floor, not back in the chiller room. And, because the stress of temperature management has been directed to the Distributed Pumping system, the knock-on effect is that a much smaller main pump is needed.

One MAGNA3 is designed to replace each PICV. However, if a redundant or fail-safe system is needed, two MAGNA3s can sit next to one another. In the unlikely event that the first malfunctions, the reserve MAGNA3 kicks in. In any case, a simple, non-return valve prevents back-flow.

"Our MAGNA3 pumps are not only super efficient and intelligent, they are also maintenance and leakage free due to the unique design without any shaft seals. An important parameter in any data center"

In a Distributed Pumping system, temperature sensors are deployed in sensitive locations around the bypass/decoupler line. Responding to feedback from these sensors, the main pump automatically adjusts its speed and, consequently, the water flow is reduced through the bypass. If the secondary side demand is less than the desired minimum flow from the chiller unit, the control unit takes charge and allows the bypass/decoupler to maintain minimum flow.

This is why less accumulated energy will be required to pump the chilled water. It also is the reason that balancing the system is unnecessary. Which means the men in blue overalls will not need nearly as long to commission it. Even the chiller unit will be happy with Distributed Pumping: the Delta-T will automatically be optimised, even in part-load operation.

MAGNA3s can also be used in condenser water loop systems with CRACs. Although temperatures may, typically, be higher, the issues faced are similar to those encountered in a chilled water system.

One top-of-mind issue in a data center is scalability. Within reason, Distributed Pumping can be part of a scaling-up strategy. Provided your pipe diameters are adequate and your main pump has spare capacity, more CRAHs and MAGNA3s can be added without recommissioning the entire system or the originally installed MAGNA3s.

"The beauty of Distributed Pumping is that each pump has its own sensors and control loop. They are not linked together in one large control system, but independent systems working together in perfect symbiosis. Still capable of supporting the building management system all the necessary data. If a pump changes set point to keep constant temperature it will affect flow and pressure in the entire system. The other pumps will automatically adjust to accommodate the new conditions in the same way as if a new CRAH and MAGNA3 has been added to the system. This paves the way for scaling your chilled water system without recommissioning it." 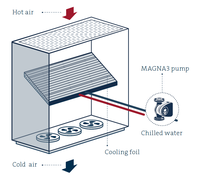 Investing in this new paradigm for data center cooling is not only exciting, it is low-risk and, because MAGNA3 is engineered by Grundfos, you can expect world class quality and reliability - just as this is expected from your data centre. As your ambitions for both growth and performance increase and you feel the need for speed, Distributed Pumping and MAGNA3 can help you take the brakes off.

For more information about Grundfos' Distributed Pumping systems get in touch, or visit their website.