A key aspect of Donald Trump’s campaign was a call for a trillion-dollar decade-long program to rebuild highways, tunnels, bridges and airports across America.

“We’re going to rebuild our infrastructure, which will become, by the way, second to none. And we will put millions of our people to work as we rebuild it,” he said in his victory speech. The $1 trillion will not come from the state, however. Instead, it is thought that Trump will offer $140-160 billion in tax credits to stimulate and encourage private businesses to do the heavy lifting. 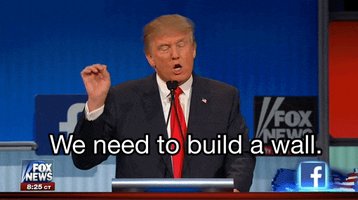 Transport, power… and that wall

In an infrastructure report by Trump senior advisors economist Peter Navarro and billionaire financier Wilbur Ross released prior to his election, the pair discuss not just rebuilding highways, but also “our digital superhighways [that] connect us to each other and the world,” suggesting that the Trump campaign are aware of physical infrastructure’s role in the digital world.

The paper also complains that “our iPhones are smarter than many of our air traffic control systems” which could be a nod towards upgrading the computer systems and data centers of the US government.

In addition, should businesses proceed with a major road rebuilding effort, it may also serve as an opportunity for the deployment of fiber conduits. “More than half of the cost of new broadband deployment is attributable to the expense of tearing up and repaving roads,” Representative Eshoo said in 2009.

Some, including Dish CEO Charlie Ergen, have noted that those in rural America who overwhelmingly voted for Trump also have poor Internet access. Ergen told The Wall Street Journal that he expects “some real initiatives there.”

Whether Trump will be able to encourage private investment in many infrastructure projects that do not have clear fiscal return opportunities is, however, a subject of much debate.

The Trump website states that “under the failing Obama-Clinton policies, infrastructure projects across the U.S. are routinely delayed for years and years due to endless studies, layer-upon-layer of red-tape, bureaucracy, and lawsuits—with virtually no end in sight. This increases costs on taxpayers and blocks Americans from obtaining the kind of infrastructure that is needed for them to compete economically.”

In particular, the Trump campaign notes that it plans to “eliminate our most intrusive regulations, like the Waters of The U.S. Rule.”

Regulations that affect data centers are varied, and many may be affected by the Trump administration.

For example, the Spill Prevention, Control and Countermeasure (SPCC) plan on diesel fuel storage in excess of 1,320 gallons has been targeted by some Republicans, and the Clean Air Act is likely under threat. Other regulations to be aware of include the EPA’s Ozone Depleting Substance (ODS) rules that covers some HVAC and fire-suppression systems.

On the reverse side, Trump has spoken negatively of corporate incentives, as well as placed an emphasis on the value of job creation. With reports putting tax incentives for hyperscale data centers at $2 million per job, it may not be the most attractive industry to him.

Whether being mocked by pundits or chanted feverishly by fans, Trump’s great wall between Mexico and America was a centerpiece of his campaign that electrified supporters and angered critics. Should he follow through on his promise, it will impact the global infrastructure market in a noticeable way.

In July, Bernstein Research analyzed what it would take to build a roughly 1,000 mile 40ft high concrete wall along the border. “Our analysis suggests that, at 40ft high, The Trump Wall would add over 1 percentage point to cement demand in both 2018 and 2019, a significant increase in market growing at 4-5percent per annum.,” it states, something that will impact the cost of construction projects elsewhere - including data centers.

“As ludicrous as The Trump Wall project sounds (to us at least), it represents a huge opportunity for those companies involved in its construction,” the report adds. Whether Cemex, the world’s second largest concrete company worldwide would be involved, however, is another matter - as a Mexican company, it is unclear how Trump will treat it, and indeed, all other foreign companies.

Since becoming President-elect, Trump has retreated on some of his promises over the wall, suggesting it will be a fence in places. A border fence currently exists across parts of the border.

Buoyed by Trump’s promises on infrastructure spending, stocks on companies in the industry have risen mostly across the board. Vulcan Materials, Martin Marietta Materials, and Caterpillar have increased in value on the election announcement.

However, as Politico notes, not all in the Republican Party are enthused about the idea of infrastructure spending, and may challenge Trump’s moves.