Report clarifies the definition of edge

Edge consortium defines the the terms, applications and implications - but leaves the delivery vague

For those still grappling with the meaning of “edge”, a consortium of infrastructure players has issued a report which gives a clear definition of the concepts within edge computing, and how it will impact on technologty services. The actual delivery of edge remains an open question.

Vapor IO, Packet, Ericsson’s UDN, Rafay Systems and Arm have jointly sponsored a research paper that seeks to define and develop edge computing, the State of the Edge report - billed as “the first in an ongoing series” to be released annually. The project aims to establish a consensus on the conversation surrounding edge computing, defining terms and explaining the conditions that have led to its inception, and deliberating on what applications will use it and how they will be delivered.

The report was written by Jim Davis of the Edge Research Group, Philbert Shih of Structure Research and Alex Marcham of Network Architecture 2020, and features a “special contribution” from the Cloud Native Computing Foundation. 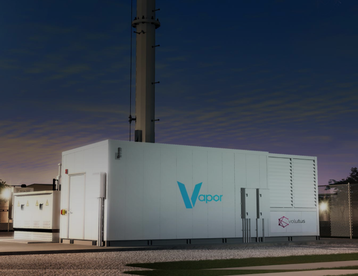 In the report’s prologue, which you can get your mitts on here,  Ihab Tarazi, former CTO of Equinix, said that “like most new ecosystems, the excitement and potential of edge computing has created substantial amounts of noise, including the proliferation of inaccurate, competing and self-serving definitions.”

“This report seeks to rationalize the different factions and help the industry converge on a common definition of edge computing and its related concepts.”

In an interview with DCD, Yves Boudreau of Ericsson’s UDN division, which provides networking and content delivery components, explained that “you ask 50 people to define edge computing and you get 50 different answers.”

And even the definitions that hold some truth, (despite some that are “disastrously wrong”), he says “can be challenging,” as they differ so much that it becomes “hard to have a constructive conversation.”

He continued: ”The goal is to accelerate conversation and innovation, not to differentiate my product line versus somebody else’s product line.”

SVP of engagement at bare metal cloud company Packet, Jacob Smith, said the project is aiming to be “as agnostic as possible” so as to “get the industry moving.”

He added that although Structure Research Group helped them “analyze their research compound,” “a lot of information came from within” the consortium, and that this was why it was important to them that they were collaborating with a diverse group.

This includes Vapor IO, the company whose edge data centers are being deployed at the base of cell towers, Rafay Systems, an edge deployment software start-up launched in November last year, the Cloud Native Foundation, and the world’s biggest microprocessor provider, Arm.

This collaborative approach, he said, “is an interesting mirror to what we see in infrastructure overall,” stating that “even in the cloud computing space, the dominant players are incredibly agile,” releasing TPU hardware and software “every 18 months.” And beyond collaboration between different players, it has become crucial to collaborate “between software and hardware.” 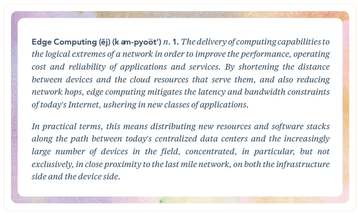 A definition of edge computing – State of the Edge

Alongside the report, Vapor IO and Packet produced an open-source glossary of edge computing, which operates under a Creative Commons license, and is now also a Linux Foundation project.

The glossary defines terms such as “multi-access edge computing,” the “device edge” and the “device edge cloud,” but also wider industry terms like data sovereignty, network function virtualization and C-RAN.

Contributors are invited to “provide suggestions, corrections and additions” to the edge encyclopedia via a GitHub repository.

The consortium also backed the creation of a “categorization infographic of all the vendors and organizations,” considered to be involved in edge computing, explained Vapor IO’s CMO, Matt Trifiro, called ’the Landscape to Edge.’ 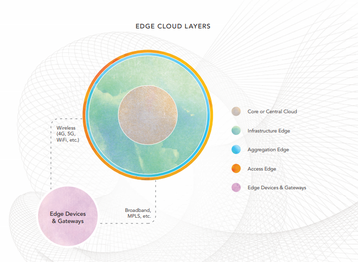 So what does it actually say?

DCD read the report from cover to cover (so you don’t have to). And these are the main takeaways we took from it:

The edge will both be undisociable from, and function in a similar fashion to the cloud: the edge offers advantages in terms of bandwidth, latency, reliability, availability, security and the possibility of using specialist or high-density hardware, but the core will still be needed for less latency-sensitive processing and storage.

There will be several types of edge systems, including edge devices themselves, IT infrastructure at the network edge (at the base of cell towers), and another type of system, somewhere between the device and cell tower edge and the centralized core, which the report refers to as “the aggregation edge.” Presumably this means larger data centers located in metro areas, where data of interest can be sent, leaving the bulk behind at the edge of the network.

The edge will give birth to “edge native” applications, such as systems to operate autonomous vehicles, VR and AR, online and live streamed video games, HD video surveillance, IoT and IIoT, and these applications may require specific high-density hardware, designed and automated according to edge requirements, as well as their own workload management functionalities (think container orchestration systems). It will also enhance applications like content delivery, allowing for personalized streaming services or advertising.

Edge providers will need to develop new purchasing models, as, beyond the need for automated resource allocation, incidences of scarcity of available infrastructure at the edge will mean resources’ value will fluctuate and market dynamics will need to come into play.

Providers will also have to find ways of accessing and controlling networks more than under the current cloud model, where they can be abstracted by overlays and their specifications matter little.

Edge computing is the result of a natural progression from a centralized, mainframe computing model in the fifties, which was succeeded by a highly-hardware dependent, decentralized period when PCs became the norm, and another phase of decentralization, which had the added benefit of scalability, with the advent of cloud computing.

The edge, it says, will bring “the best of cloud with the best of the personal computer.”

Different things are driving edge’s development: enabling technologies, like cloud native software built for distributed architectures, 5G technologies, new hardware for AI and ML and supporting software, blockchain - which it says will “drive consumption of edge computing services” and “underpin” their use -  and the growing number of vendors contributing to an edge infrastructure supply chain.

Secondly, changes in cloud computing are helping to set the stage for the edge, with the normalization of hybrid architectures, hyperscalers’ large investments in IoT and their focus on increasing bandwidth between compute resources, the growing number of resources to train AI models, the increased use of bare metal instances, which it says will “create comfort with non-virtualized IaaS options;” and CDN progression from the caching and delivery of content towards “building applications and APIs on and growing their distributed compute resources.”

Networks are changing too, and this is laying the foundations that make edge computing possible, with new private networks and submarine cables being built, the creation of decentralized, cloud-based network security systems, and the development of SDNs.

Wider trends are doing their bit to bring the edge a little bit closer to us, too. Developers are increasingly keen to build applications for all manner of resources, enterprises want to be seen to be providing the best digital services, and global business is evolving in a way that is likely to see “a more sophisticated approach to IT build out.

Though the report doesn’t bring much new content to the table per se, there is something to be said for the curation and collation of information, which, by observing elements up and down the stack, may bring some clarity for those of us still grappling with what edge is, where it is, and how it will come about.

Arguably, the reasons for the brouhaha around edge computing may be due to its being in its nascent stages, and that beyond defining its terms, there is little to do but wait.